Organizers of unionization efforts at Amazon, Starbucks, and the New York Times discuss how their experiences as women shape their work.

Economist J.W. Mason joins the podcast to talk about inflation and how to organize around price increases. 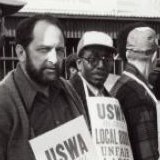 With a pandemic pause on student loan repayments set to expire this year, debt abolitionists have stepped up their campaign to get Washington to cancel education debt entirely.

A two-part episode on logistics labor, with Michelle Valentin Nieves of the Amazon Labor Union, and Laleh Khalili, author of Sinews of War and Trade.

A conversation with Ari Brostoff on David Horowitz’s trajectory from the New Left to conservative firebrand.

Retail has historically been one of the hardest sectors to organize, but workers at REI are bucking that trend.

Writer and advocate Gillian Branstetter joins the podcast to discuss the right’s war on trans people.

This week teachers and education workers went on strike in Minneapolis for the the first time in fifty years.

Jamelle Bouie returns to the show to discuss the rise of rhetoric—not only but especially from the right—about a “second Civil War” in the United States.