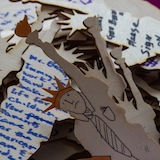 We talk to DACA recipients and defenders around the country, from Texas to New York, about Trump’s decision to overturn President Obama’s protections for immigrant youth.

Suddenly, everyone on the left is talking about resistance. This is something we should celebrate—while recognizing that it is only half a politics.

For nearly two centuries, immigrants have been among the U.S. left’s most important partisans. As a new mass movement comes into being, they must again be at the heart of it.

A conversation with Barbara Madeloni, president of the Massachusetts Teachers Association and a leader in the successful No on Two campaign against charter school expansion, about the lessons from that fight for organized labor in the Trump era.

The Trump administration poses a serious threat to liberal democracy, and we need to respond accordingly. Gene Sharp, the “Machiavelli of nonviolence,” offers valuable insights into how.

The outpouring of witty protest signs at recent anti-Trump protests is something new in the repertoire of social movements. But the thrilling horizontalism that the signs reflect has its limits.

As this weekend’s airport protesters recognized, it takes more than courts to defend constitutional rights.

To establish a counterhegemony against that of finance capital, we must build a new, “progressive-populist” bloc combining the goals of emancipation and social protection.

While its vision of equality is still far from being fully realized, the women’s liberation movement of the 1960s and ’70s won important victories and offers vital lessons for today’s organizers.