An interview with Jillian C. York, the author of Silicon Values: The Future of Free Speech under Surveillance Capitalism.

An interview with Gabriel Winant on deindustrialization, the care economy, and the living legacies of the industrial workers’ movement.

An interview with Sarah Jaffe on labors of love, the women who shut down Woolworth’s, Colin Kaepernick, and why class is not a static identity.

In Freedom from the Market, Mike Konczal turns to a usable American past to explain how we can build a society free from want and market dependence.

In Resource Radicals, Thea Riofrancos explores how conflicts between left movements and the left government in Ecuador produced a militant critique of the extractive model of development.

In The Feminist and the Sex Offender, Judith Levine and Erica R. Meiners pull back the curtain on the history of the sex offender registry and explore how we can strive to reduce sexual harm without mass incarceration.

The author of The Deficit Myth on why national debt is not an obstacle to progress—and why the government can afford to fund its priorities.

The history of rank-and-file organizing at UPS reveals the opportunities and challenges for a union movement of delivery and warehouse workers. An interview with Joe Allen, author of The Package King.

The author of What You Have Heard Is True talks about her political education in El Salvador.

Katrina Forrester’s In the Shadow of Justice explores the world that shaped the ideas of John Rawls, and how his work remade political philosophy. Is there still room for his liberal egalitarianism in an age of ideological ferment and social conflict?

An interview with Marcia Chatelain, the author of Franchise—a book about how “stateless people found some comfort in a corporation.” 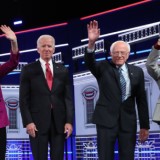