As the ongoing protests in Ferguson, Missouri subside from national attention, the conditions that fostered them have only come into clearer view. Greater St. Louis, as I noted in my last blog post at Dissent, has always been a remarkably segregated city; in this regard, it epitomizes the broader patterns of inequality crisscrossing the United States.

By almost any economic metric, the gap between white and black Americans is sustained and substantial. It’s no secret that African Americans earn less; more telling still, the wage gap has widened over the last three decades. In 1979, the median black wage was $13.57, or 82.5 percent of the white median ($16.44). Since then, the median white wage has grown to just over $18.00, while the black median ($14.08 in 2013) has barely budged—slipping to just 76.6 percent of the white median.

But the jaw-dropping gap is that of wealth. Depending on the survey instrument and the exact definition of “wealth” used, median black wealth sits somewhere around 10 percent of median white wealth. So while the black worker earns about three-quarters the wages of his or her white counterpart and the black family or household claims just under two-thirds the income of its white counterpart, the gap in wealth—with all of its implications for economic security and intergenerational mobility—is dramatically wider. New data from the Survey of Consumer Finances, released earlier this month and summarized in the graphic below, confirms this dismal fact.

We can think of wealth as accumulated income, and of the wealth gap as an accumulation of the income gap, but this only hints at the underlying causes. The real story here is the long shadow of housing segregation and discrimination. Home equity is the most important element of household wealth, especially for families of moderate means and especially for African Americans. Beginning in the 1940s, when new federal subsidies (mortgage insurance and subsidies, the GI Bill) transformed housing finance, home ownership became an escalator of wealth creation for most white Americans. But most black Americans (in an era, as Ira Katznelson puts it, when “affirmative action was white”) could not take the first step. Rates of black homeownership lagged behind those of whites. Over this span, fewer African Americans entered the housing market; they entered it later in life (whites still buy homes on average eight years earlier than blacks); and they entered it on relatively unfavorable terms.

This gap is sustained, in part, by disparate patterns of inheritance. By Mark Wilhelm’s estimate (2001), while one in four families claim an inheritance (averaging $145,000), only one in twenty black families do so—averaging only $41,000. As a result, about half of white households are able to rely on family assistance to break into the housing market—compared to just 12 percent of black households. Family inheritance not only lowers the barriers to entry but also shapes the terms of home finance. Larger down payments (and/or “points”) reduce borrowing costs. And as we learned (again) in 2007, expanded ownership on predatory terms offers a fleeting illusion of financial security—and is as likely to destroy wealth as to build it.

While the national numbers are chilling, the lived experience of the wealth gap is local—in the stain of sustained segregation and concentrated poverty that mark our central cities and inner suburbs. Inequality is embedded in places—in the neighborhoods where families buy homes, raise families, and pass on assets and opportunities to the next generation. This inequality, as the work of William Julius Wilson first underscored, is fostered not by the habits of the poor but by the places where they live. Deindustrialization robbed central cities of their job base, eroding both the economic viability of black families and the neighborhoods in which they lived. Land-use regulation (zoning), both at its inception in the 1920s and ‘30s and over time, systematically underzoned areas of African-American occupancy (allowing commercial, industrial, and multifamily use) while adopting stark and exclusionary limits on non-residential use and residential density in white neighborhoods. Lingering vestiges of segregation such as racial steering and block busting made it hard for poor African Americans to leave the central city, even as civil rights advances made it easier for middle-class blacks to do so—robbing those neighborhoods of their “middle-class buffer.”

As new work from Patrick Sharkey and Paul Jargowsky underscores, these local conditions do not just concentrate inequality, they sustain it—over time, and across generations. Despite considerable gains in educational attainment, African Americans have lower rates of upward mobility and higher rates of downward mobility than do whites—a pattern largely determined by neighborhood conditions. When white families live in poor neighborhoods, they tend to do so for a generation and then escape; when they live in rich neighborhoods, they stay there. For black families, very nearly the opposite is true: most raised in wealthy neighborhoods will lose ground, while fully 70 percent of who live in the poorest, most segregated neighborhoods are from families that lived in the same (or comparable) neighborhoods a generation ago. This sustained inequality, as Sharkey concludes, is “something that occurs over long periods of time and structures the opportunities available to families over multiple generations.”

Part of the reason that both neighborhood conditions and the life chances of those raised in them are so ossified in the United States, of course, is that so much is at stake. Private income and wealth not only structure inequality but have shaped the provision of the public goods that might alleviate it. Employment prospects determine access to health insurance and pension coverage. And the property taxes flowing from housing value shape the quality of local public goods and services—especially education. This exaggerates both the desire to flee for those with the opportunity and means to do so, and the disadvantages for those left behind.

This brings us back to Ferguson—a setting in which the debilitating legacy of segregation and concentrated poverty can be seen in the political and fiscal incapacity of a struggling inner suburb, and in the (lack of) opportunities for those who live there. The map below underscores the stark persistence of segregation in Greater St. Louis, even as the line of racial occupancy and racial transition moves through Ferguson and the other postage-stamp municipalities of north St. Louis County. 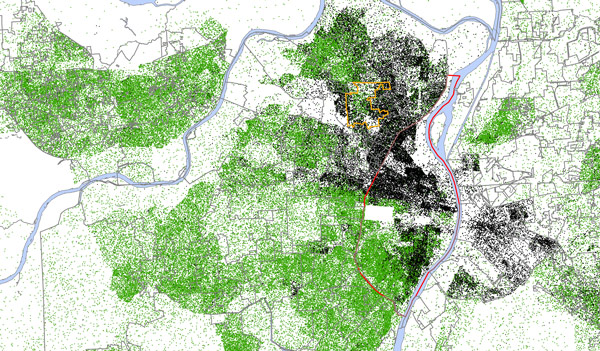 What is remarkable, in this respect, is not just the way in segregation has been sustained but the way in which its dimensions map so cleanly onto patterns of economic disadvantage and discrimination. As racial transition pushed into Ferguson from the south and east, poverty rose steadily: today, most of Ferguson’s neighborhoods have poverty rates over 20 percent, a circumstance increasingly common in struggling inner suburbs. Local incomes and housing values, in turn, shape the provision of public services: local school revenues in the Ferguson-Florissant district run a little over $5,000 per student—scarcely a third of the revenue generated in the wealthier districts running through the central county. 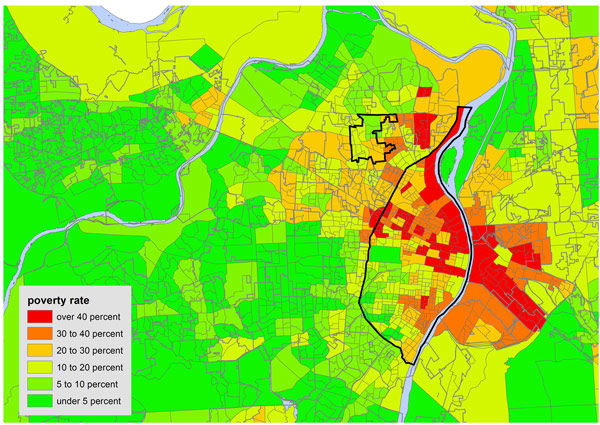 This pattern is replicated in unemployment rates, which run at two to three times regional and national averages. This is partly driven by the intersection of demographic shifts and discrimination (black unemployment consistently runs at twice the rate of white unemployment). It is partly driven by the peculiar economic struggles of inner suburbs, whose economic assets are constantly being poached by outer suburbs (this is especially true in Greater St. Louis, where tax laws encourage intense and destructive competition for retail and commercial investment). And it is partly driven by the underlying fiscal incapacity of cities like Ferguson, where a combination of weak public goods (especially schools), aging infrastructure, and aggressive policing discourage new economic development. 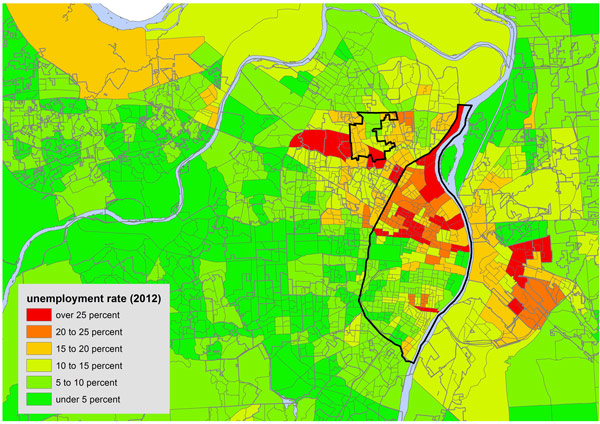 The death of Michael Brown may have struck the match in Ferguson, but it was these conditions of sustained and localized inequality that kept the tinder dry and ensured the fire would catch. As long as patterns of economic inequality remain intact, merely addressing the jarring contrast between a largely black populace and overwhelmingly white political and police rule will accomplish little. Winning power, as a generation of African-American mayors and city councilors can attest, is small solace when local resources and local fiscal capacity make effective governance nearly impossible. And affirmative recruiting in the Ferguson police department will address a symbol of segregation but not its substance.

The cascading wage and income and wealth gap, and its racial and spatial logic, is a much starker challenge. Its deep historical roots and lasting impact lie behind the case for reparations made so powerfully by the Atlantic’s Ta-Nehisi Coates earlier this year. In greater St. Louis, at least partial redress would begin with a stronger sense of metropolitan responsibility for the local legacy of segregation and the local inequalities it has sustained. If we can agree that sewers and transportation planning only work on a metropolitan basis, it’s no great leap to say the same for property taxation, zoning, or economic development. Only then can we dampen the incentive and opportunity to leave the city, and its inner suburbs, behind.

Colin Gordon is a professor of history at the University of Iowa. He is the author of Mapping Decline: St. Louis and the Fate of the American City (2008) and a companion website.