Since the 2016 elections, Democrats have endlessly debated how to reach the “white working class”—a demographically imprecise group alleged to have gone for Trump in big numbers. As multiple studies have shown, all white voters are in fact intensely polarized into two groups: one, open to progressive appeals, that recognizes racism is a reality in our society, and a second group, unfortunately larger, that thinks racial inequality barely exists and was mobilized by Trump’s racist appeals.

Reaching the second group while maintaining a commitment to racial equality will be hard in the short term. But in contrast to the media stereotype of the Trump base—downwardly mobile, poor, and/or working-class people seduced by racist appeals—it turns out that white voters who support anti-racist policies generally have less income than their more racist peers, as data released recently from the General Social Survey makes clear.

High-school-educated white voters who agree economic inequality between black and white people is “mainly due to discrimination” generally support Democrats and basically didn’t move toward Trump in 2016 from Romney four years earlier (although some defected to third-party candidates that year). Those who don’t believe discrimination is an important cause of inequality overwhelmingly already supported Republicans—and shifted even more to Trump compared to Romney four years earlier. See the graphs below for the data comparing groups labeled here “Recognizes Racism” (ie. believe discrimination drives inequality) versus “Racism Denial” (those who don’t). 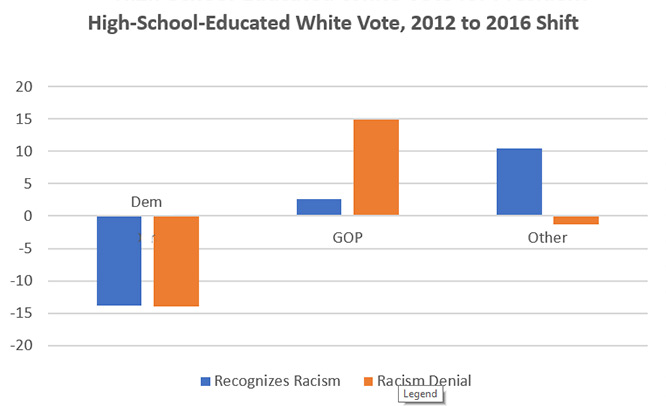 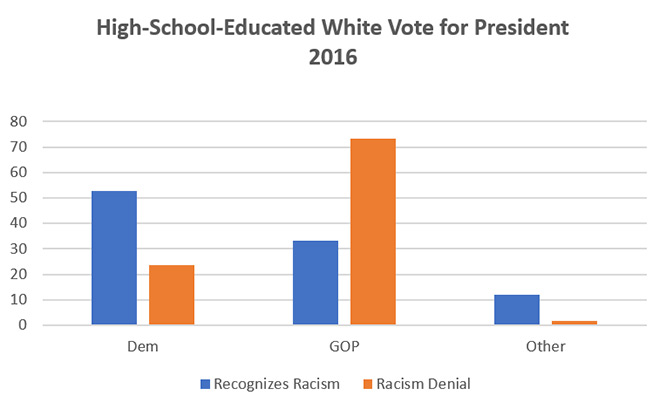 This divide over racist views plays out similarly at all educational levels. College-educated white voters who also dismissed discrimination as a cause of economic inequality had similar voting rates for Trump (68 percent) as did high-school-educated white voters who dismissed discrimination (73.5 percent), and also shifted to Trump from Romney four years earlier. (Still it is worth noting that a smaller proportion of college-educated whites dismissed racism as a problem in the first place.)

Given these intensely polarized voting patterns, it’s impossible to talk about a “white youth vote.” The good news, though, is that the group that acknowledges discrimination makes up a majority of young white voters—a hopeful sign for years to come. 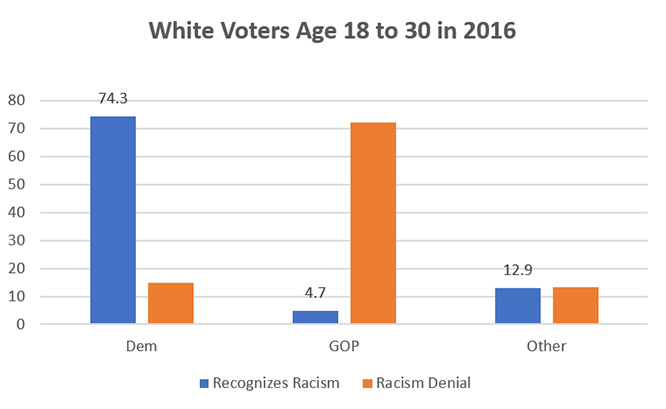 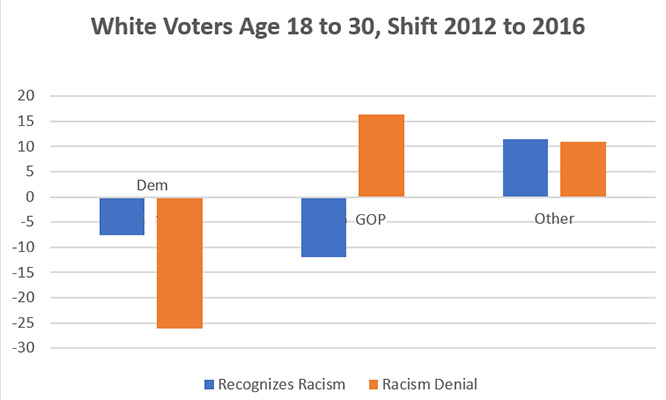 This still doesn’t deal with why a chunk of white voters were racist enough in the first place to be mobilized by Trump. It has become popular to suggest that “economic anxiety” is the underlying engine of white rage, implying that a stronger left-wing economic appeal—and a de-emphasis of racial justice—might win them back.

As the data show, among high-school-educated white voters, it is the richer members of that group who most dismiss the salience of racial discrimination. The poorest white people are the only income group where a majority believes racism drives the racial economic gap—undercutting the idea that racism is the result of economic suffering. The denial of racism is strongest among high-school grads making $90,000 or more a year. The same is true of college grads and those with graduate degrees: those with higher incomes generally deny the prominence of racism at higher rates than lower-income members of the same educational level. Rather than racism being driven by personal economic pressure, far more compelling are theories that see white racism as stemming from voters justifying their own relative economic success, and their “fear of falling” (as Barbara Ehrenreich put it) if society became more equal. 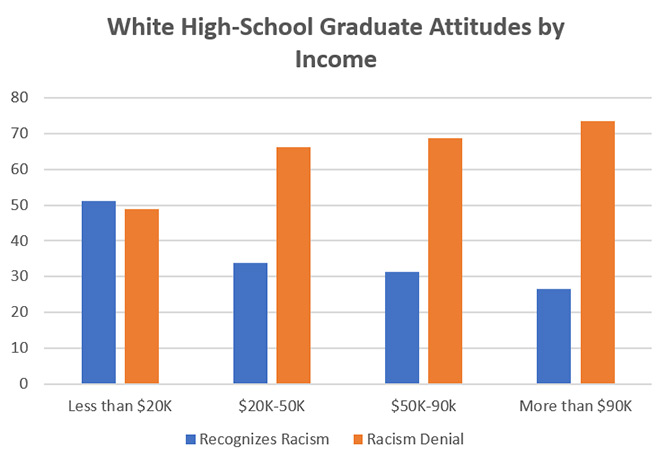 There are important implications of this data. There is a significant group of white voters, especially among the young, who take discrimination seriously and are part of a strong, multiracial base of the Democratic Party. And the white voters who are a part of that coalition generally have lower incomes than other white voters. At the most amoral, tactical level, there is no tradeoff between racial and economic justice; the same message can mobilize black, Latinx, and Asian Democratic voters as well as the portion of the white electorate who recognize the reality of racism.

While some Trump voters may be recruited on the margins, they shouldn’t be the main focus of any 2020 strategy. Maximum mobilization of this existing coalition, and registration and turnout efforts for white people who fall in this category but don’t vote, would be a far more fruitful focus.

Nathan Newman is a writer and professor teaching research methods, criminal justice, and inequality at CUNY. He is a longtime policy advocate working with state and local activists around the country.