3:30 p.m.: I continue to be struck by the things convention reporting doesn’t tell you about. It doesn’t reveal, for example, the rhythms of the days at the DNC. In keeping with the collegiate feel of the production—by which I mean the incessant socializing, the free food, the crashing of parties—the day starts late. People sleep in, and the main action takes place at night: the big speeches, followed by the parties. (Because we’re in the Mountain time zone, the speeches end at 9 p.m. promptly, leaving ample time for nocturnal recreation.)

The days center on serious, sober events, many of them in downtown Denver at the city’s convention center or its performing arts complex. Delegates have special breakfasts and luncheons honoring someone or other. Crowds, small and large, gather for panel discussions on policy issues or organizing sessions by activist groups. Convention-goers move in and out of these freely. However substantive, the gatherings have an obligatory feel. 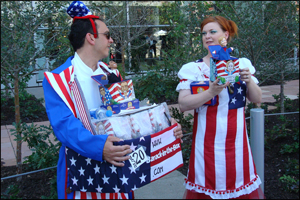 Downtown is also where the prime hotels are, where the restaurants are full, where the daytime activity centers. The merchandising here is rampant and reminiscent of a rock concert or sporting event: not just the usual assortment of hats, T-shirts and pins, but also Obama pennants, foam hands, and squeezable toys. The sidewalks teem with the vendors, some clearly professionals who have done this before and others who are just as plainly amateurs with their own T-shirt designs (“Ban a Republican” in the Banana Republic font). While some appear to be passionate Democrats, here to spread the message, many more would be happily doing the same thing at a GOP convention.

In general the commercial aspect of the conventions escapes the notice of journalists, who are here, after all, to tell the political stories. For example, the media tent is awash in corporate sponsorships, from lanyards stamped with the name of one telecommunications firm to a refreshment tent brought to us by another. (A worker at the refreshment tent gave out pins that were digitally encoded with $10 of credit usable at the arena’s concession stands; in return for one, he urged me to write about the sponsor company, but I told him that journalists can’t be bought.)

And then there are the luxury boxes and the corporations and trade groups that buy them; they garner the occasional newspaper feature, usually at the outset of the weeklong convention, but after that the subject is considered covered. I don’t know how many of these companies would allow a reporter in, but wouldn’t it be interesting to hear the conversation in one during the prime-time speeches? Last night, in fact, I walked into one, guarded casually, and watched the whole of Ted Kennedy’s speech, before the owner came in to find that all three rows, comprising maybe 18 or 21 seats, were filled with interlopers like myself. He felt compelled to evict us, in a crude display of the power that wealth affords—“I paid for this box,” he said, probably unaware of the echo of Ronald Reagan, before adding, as if to mask his stinginess with a patina of generosity, “and I’d like to seat my guests.” The disgruntled crashers retreated to the nosebleed seats.