In a moment when Black Lives Matter has succeeded in bringing longstanding police abuses to public attention, Lewis’s legacy has never been more visible.

The pragmatic engagement that Marshall believed in required the United States to know its limits but also to honor its values whenever possible.

At the dedication for the Lincoln Memorial, President Harding portrayed Lincoln as the president who “maintained union and nationality” rather than the president who ended slavery. Changing the monument’s meaning took political struggle.

At its best moments, Roseanne offered something Roseanne Barr’s tweets did not: empathy, nuance, and a portrait of white working-class life rarely seen on television.

The student-led movement against gun violence is inseparable from the broader range of social movements that have sprung up in the Trump era.

“I am not looking for approval,” Kaepernick has told the media. “If they take football away, my endorsements from me, I know that I stood up for what is right.”

The 53 percent of white women who voted for Trump represent a major political constituency; but if Saturday was any indication, they may before long be outnumbered by the likes of the marchers I saw holding signs that said, “Women are not up for grabs.”

The Trump camp’s response to Friday’s statement from the Hamilton cast reveals a dangerous double standard on civility. 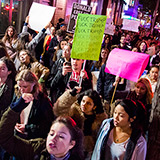 Without realizing it, Donald Trump has politicized a generation as no other politician could have. 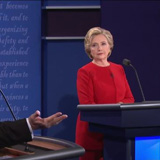 After two weeks of losing ground in key battleground states, Hillary Clinton needed a good showing at last night’s first head-to-head presidential debate with Donald Trump. She did better than that. 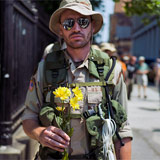 In his new book Tribe, celebrated war correspondent Sebastian Junger argues that the primary source of our vets’ postwar difficulties is not trauma from the wars that we have asked them to fight, misguided as they may be. The vets’ biggest problem is American society. 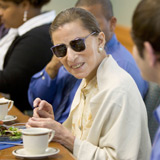 With the presidential election approaching, the Supreme Court has handed Democrats an important political victory—a unanimous 8-0 decision in the case of Evenwel v. Abbott.