Since March 2014, the Front National (FN) has governed eleven French municipalities: four in the northeast of the country and seven in the southeast, along with one of Marseille’s eight boroughs. About a year after the municipal elections, polls found that a majority of these cities’ residents—74 percent—were “largely” or “very satisfied” with their new local governments. “A repudiation of the system,” declared Steeve Briois, mayor of Hénin-Beaumont, the third-largest municipality governed by the FN.

The National Illusion, as we titled our two-year photoreportage on three of these FN cities—Hénin-Beaumont and Hayange in the north and east, Beaucaire in the south—is a projection, in miniature, of what a France run by the FN might look like. Our goal was to listen to the residents of these three cities and to give them a face. Over the course of our reporting, we found that there is a major gap between the FN’s rhetoric and the wishes of its electorate. While those we met largely shared the party’s anti-immigrant stance, worried about threats to national security, and extolled “national identity,” most of them also stressed a desire for social justice and equality. They no longer believe in France’s two longstanding parties of government. Their vote expresses disillusionment and betrayal.

The Front, in other words, has stepped into a political vacuum. Its leaders adapt the party line to their local contexts. In the deindustrialized north and east, they respond to working-class concerns, highlighting economic and social issues and presenting themselves as the guardians of values that “the system” has abandoned: republicanism, secularism, national sovereignty, opposition to the free market. Their anti-globalist, anti-immigrant rhetoric feeds on local misery. In the conservative southeast, on the other hand, the FN appeals primarily to retirees and professionals, with a more market-oriented economic message and more emphasis on the dangers of terrorism and Islam. In both settings, their electorate comprises party faithful but also many who even yesterday still swore they would never vote FN.

Today, however, with Donald Trump’s election, Brexit, and rising nationalism across Europe, the FN’s voters and sympathizers affirm the party line more openly. Some even defend it with pride. This tendency is perhaps most pronounced in Hénin-Beaumont, a former mining town of 27,000 in France’s far north. A leftist stronghold since the end of the Second World War, Hénin-Beaumont is now an emblem of the National Front.

Here, unemployment stands at around 20 percent; about half of those receiving benefits have been unemployed for more than a year. The town saw the largest zinc smelter in Europe, Metaleurop, shutter in 2003. A major coking plant shut down just the year before. Meanwhile, a few minutes from the center of town, one of the largest shopping centers in Europe is bustling. Hénin-Beaumont residents flock to this palace of consumption, to shop as well as to work, though the jobs are often precarious.

The election of FN mayor Steeve Briois in 2014 was the result of years of militant, on-the-ground organizing, explicitly inspired by Communist Party methods. Local political scandals—including the imprisonment of Gérard Dalongeville, left-wing mayor from 2001–2009, for corruption—also helped pave the way for the FN. The Socialist Party is discredited. The town is deep in debt. And unlike in other FN cities, the local leadership in Hénin-Beaumont includes experienced, high-ranking party cadres. With several regional and departmental representatives in city government alongside the mayor—who is himself an EU parliamentarian—Hénin-Beaumont is becoming a seat of national power for the party. The following pages offer a glimpse of what that means. 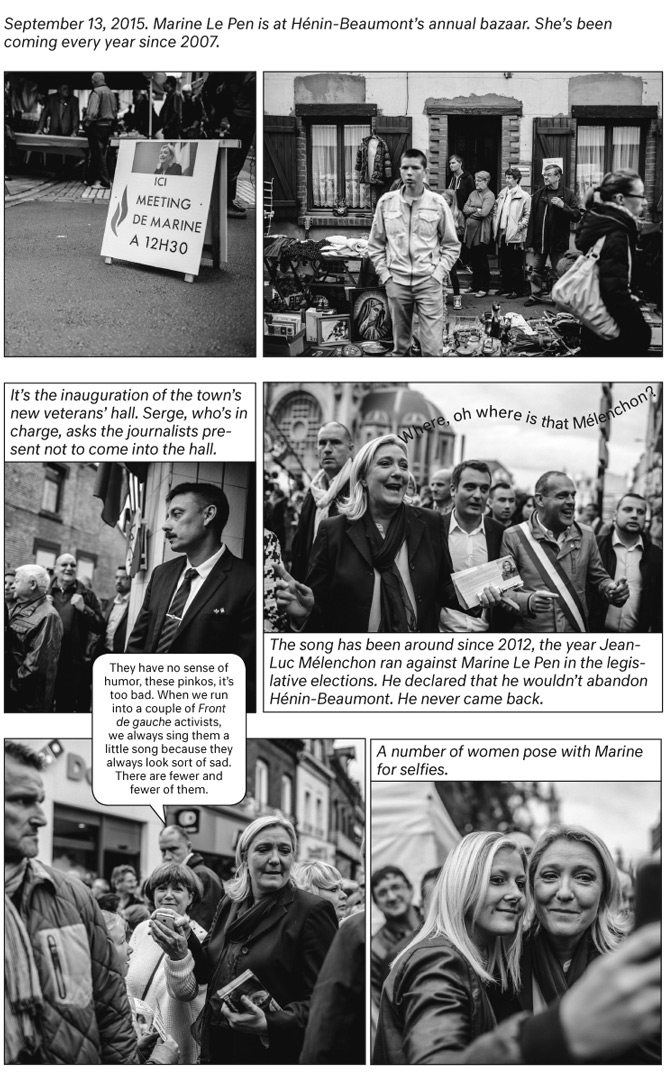 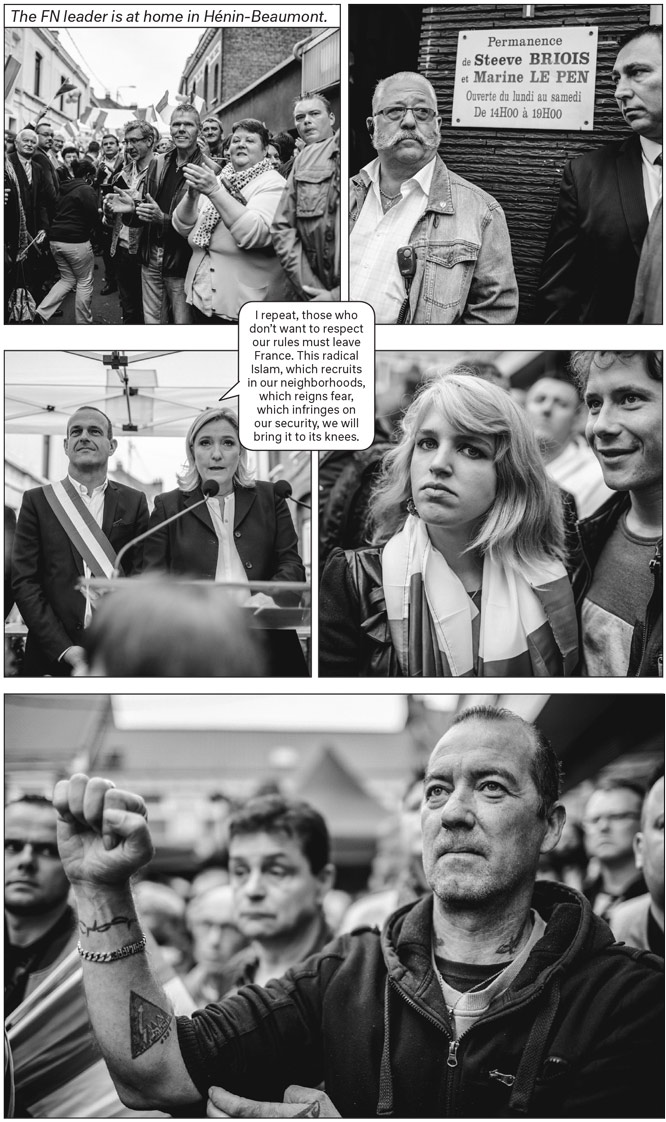 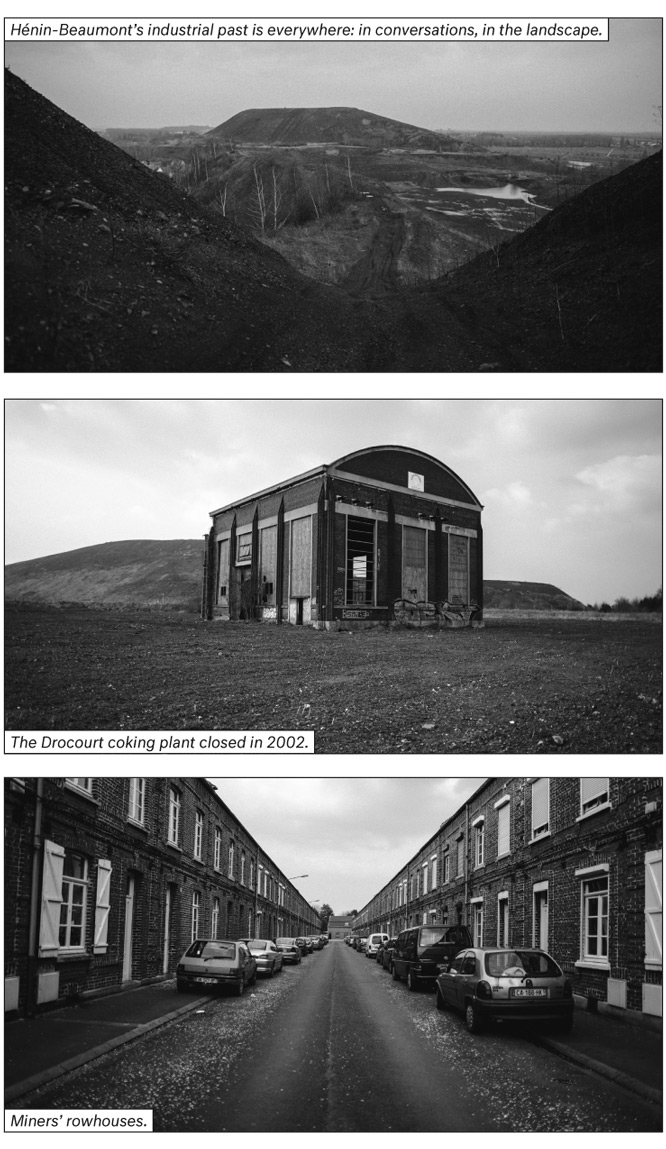 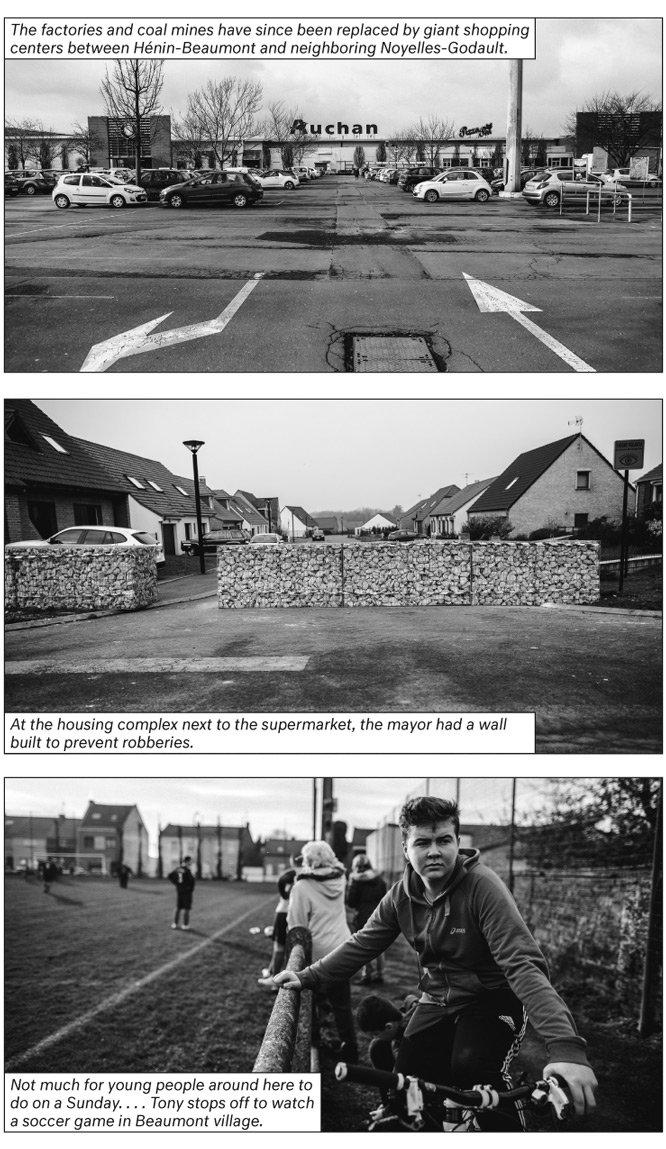 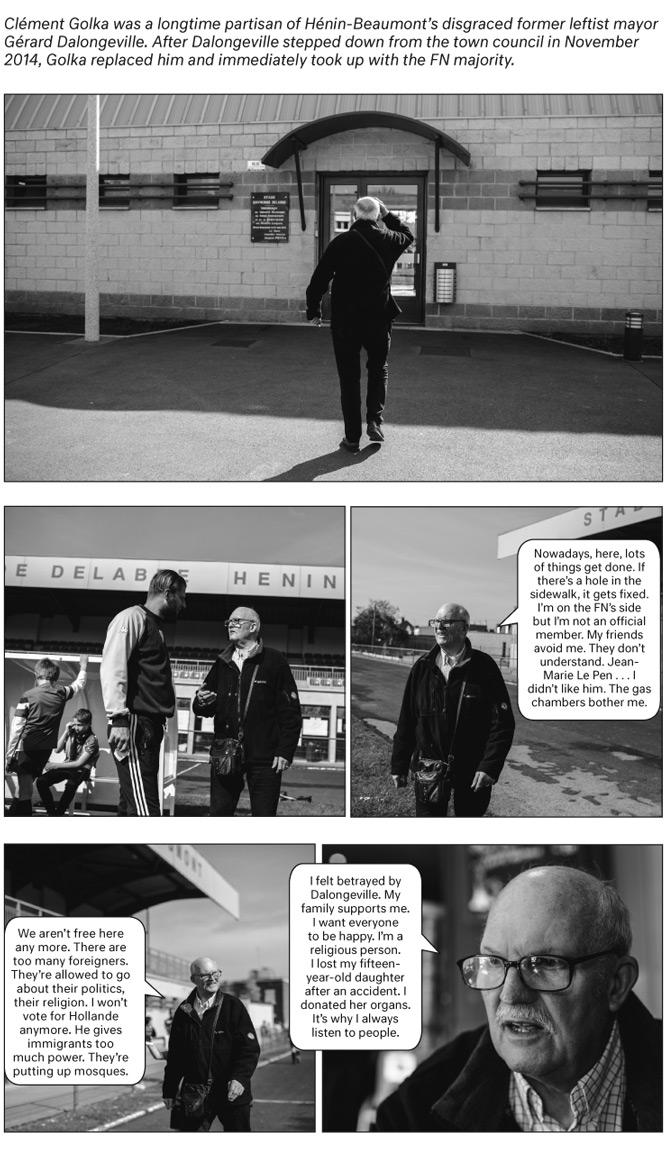 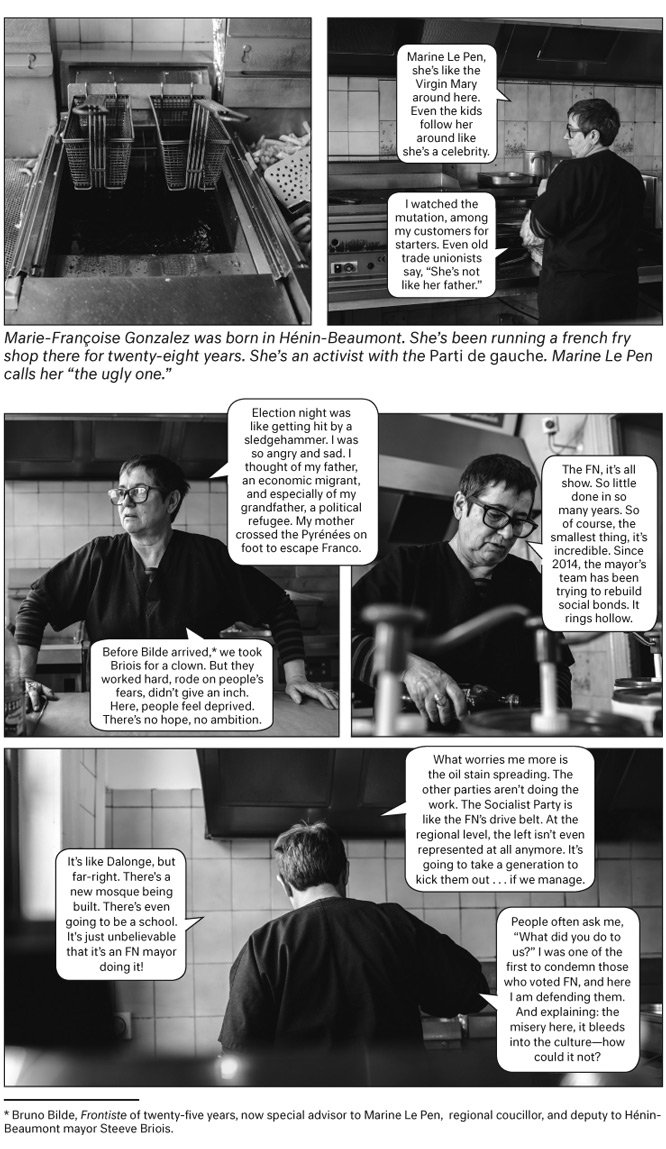 Valérie Igounet is a historian at the National Center for Scientific Research (CNRS), Paris. Vincent Jarousseau is a photographer and documentarian based in Paris. This photoessay is adapted from their book L’Illusion nationale : Deux ans d’enquête dans les villes FN. © Éditions des Arènes Paris, 2017. Translation by Colin Kinniburgh.