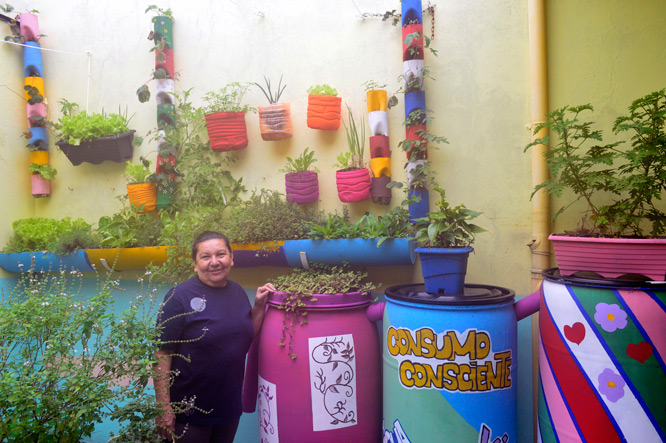 You might mistake Terezinha Silva for a middle-aged eco-fundamentalist from Brooklyn. In fact, she is a militant member of São Paulo’s working-class housing movement.

I first met Terezinha at a workshop in São Paulo last summer. In attendance were over fifty organizers—almost all working-class women of color—from the city’s housing movements and a few staff from the British charity CAFOD, which supported the gathering. The theme was integrating environmental and housing politics.

Local TV and newspapers, and then Al Jazeera, had briefly turned Terezinha into a celebrity. Why? She had learned how to build cheap, DIY cisterns from a group called Cisterns Now. And she made them look good. She then started workshops on building—and decorating—them throughout the city’s favelas and housing occupations. They helped working-class people gather and use rainwater during the city’s historic water shortage.

Later, I visited Terezinha’s home in São Mateus, in eastern São Paulo. She asserted that bottom-up, DIY initiatives were no substitute for state action. “It’s the state government that mismanaged the drought,” she said. “They’re politically responsible for the water shortages.” Echoing the vision of Brazil’s landless movement (MST), she argued that movements must both organize to meet their needs and demand more from the state. She might have painted Consumo Consciente—conscious consumption—on one of her cisterns. But this was a collective demand, not a personal goal.

We talked about how her housing movement occupies abandoned buildings to pressure the city to retrofit them and build new and sustainable affordable housing. The movement is not just concerned with playing defense against extreme weather. It is also spreading the word that the lowest-carbon path for São Paulo is to combat real-estate speculation and house more workers downtown, where they work. In other words, climate justice is housing justice.

Daniel Aldana Cohen is a writer and PhD candidate in sociology at New York University. This article draws on research for “The Rationed City: The Politics of Water, Housing, and Land Use in Drought-Parched São Paulo,” Public Culture 28(2): 261–289.