The end of the Trump administration and the start of the post-pandemic economic recovery have brought a little optimism to immigrant workers. But many are still struggling to secure their rights and just compensation.

The author of A Planet to Win talks about Biden’s infrastructure proposals and why care jobs are green jobs.

For many taxi drivers in New York City, their livelihood has become a form of debt bondage. They feel that the city and its bankers have swindled them, and they’re demanding relief.

It’s in moments when even the best-case scenario on the table doesn’t get us far enough that socialist ideas are most important. 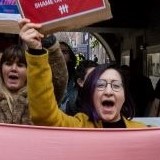 Jo Grady, general secretary of the University and College Union in the United Kingdom, talks about the prospects for a truly feminist labor movement.