Juliet believed that “a rose by any other name would smell as sweet.” Perhaps this is true, but that other name would not warn her that the flower’s stem also has thorns. Names matter; no more so than when they sharply distinguish Us from Them—Montagues from Capulets, white Americans from black Americans. The latter are now conventionally referred to in public speech and polite private conversations as African-Americans. 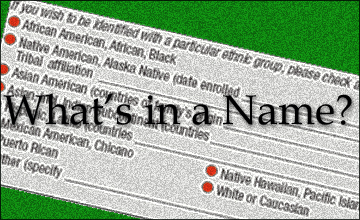 It has become preferred usage because it is, relative to other historic common usages, a neutral term; it is, so to speak, a sweeter name. But if, as Darryl Lorenzo Wellington recently observed, “language…always has and always will reflect the world we live in,” is African-American a “useful” name?

Wellington’s comment occurred in the course of a review of Randall Kennedy’s, Nigger: The Strange Career of a Troublesome Word in Dissent (Winter 2008). Wellington was critical of Kennedy’s perspective on the contemporary usage of “the N word” in popular culture. “[W]here Kennedy’s argument fails is that the cultural manifestations he is celebrating do not deepen public awareness in ways that help us move ahead, “Wellington wrote. “Thus, Kennedy isn’t celebrating overcoming the weight of the past. He’s welcoming a diminished appreciation of history—historical amnesia.” Essentially the same charge can be made of “African-American” as preferred usage.

The hyphen separating African from American places black Americans in the larger category of hyphenated Americans; it encourages a perception that black Americans are no different from, say, Italian-Americans or Irish-Americans, the descendants of a generation of immigrants. But that perception at best blurs and at worst entirely forgets the crucial difference between the histories of the two groups in America. Although prejudice and discrimination have been part of the history of all immigrant groups none has suffered the oppressions of slavery and Jim Crow and their consequences for over 300 years.

Historical amnesia is not simply the forgetting of a fact or the inability to understand historical experience; it influences our understanding of the present. To think of black Americans as just another hyphenated American group is to expect that their lives from generation to generation will be similar to those of other groups: Once the burdens of the immigrant generation—illiteracy, poverty, prejudice, discrimination—are in time overcome, the following generations will be absorbed into the homogeneous mass known simply as “Americans” whose ancestral heritages are barely noticed by others. In short, they too will be assimilated.

Yet the lack of attention paid to Rudy Giuliani’s ethnic ancestry in the presidential primaries and the prominence of race in the contest between Barack Obama and Hillary Rodham Clinton—a focus that will surely continue now in the national election—demonstrates the great difference today between race and ethnic origins: the assimilation of black Americans is still a very long way off. Anything that blurs or obscures this difference reinforces a fundamental misunderstanding of the present situation of black Americans and the difficulties of “moving ahead.”

To say, for example, that the descendants of the immigrant generations have overcome the latter’s burdens means, among other things, that they have “prospered” in America; that is, they have not remained victims of discrimination and mired in poverty. Rather, they have taken advantage of all our boasted opportunities for social mobility—they have realized the ‘American Dream.’ Although few will deny that the lives of black Americans have vastly improved since the success of the civil rights movement, it is all too obvious that severe inequalities between black Americans and the descendants of the white immigrant minorities remain. For a significant number of white Americans the difference in attainments will confirm the traditional beliefs about the inherent inferiority of black Americans. This view, of course, overlooks the real structural sources of inequality, and, thus, the possibilities of change.

Historical amnesia has at least one other serious consequence for black Americans. It minimizes the degree to which black American subculture was conditioned by the historic American experience. Slavery in America made it difficult to even think of oneself as a person; slaves were property not persons. They became citizens with the right to vote after the Civil War but Jim Crow denied them all the rights of citizenship; black Americans were denied equality with white Americans. The culture of black American communities, then, developed out of the continuous oppression of institutionalized inequality: living with the inescapable daily insults of a segregated society that treated them as inferiors and forced them to behave as inferiors—to seat themselves at the back of the real and metaphorical bus—under the ever-present threat of violence in a world, which for the most part, took the inherent inferiority of black Americans as a given and often scarcely recognized them as human beings. Any attempt to understand black American subculture must start from a focus on the black Americans’ historic and continuing struggle for social survival. If the African-American name tends to make us forget the important differences between black Americans and the historic white hyphenated Americans and some of its consequences for “moving ahead,” so the name may also make us miss an important insight into the sources of today’s black subculture.

Unfortunately, it is likely that black Americans will continue to be called African-Americans; the name seems firmly embedded as customary usage like Juliet’s wish for another name. Still, it is worth remembering that even the sweetest of flowers may have painful thorns.

Murray Hausknecht is a sociologist and member of the Dissent editorial board.