As the war in Iraq enters its fifth year, one of the least considered repercussions is the strains on the warriors waging it. The U.S. Army is overextended–fighting multiple wars in Iraq and Afghanistan, while carrying out other major missions in the so-called “Long War” or global “War on Terror.” Of all the conflicts, the war in Iraq has taken the heaviest toll on the Army. 4,000 American troops have died in Iraq, and 30,000 have been seriously wounded. 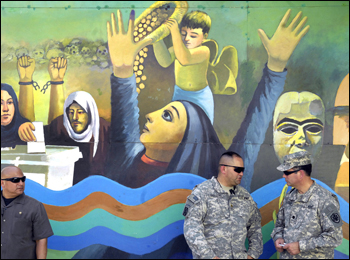 Equally important, the U.S. war in Iraq has left deep psychological scars on many soldiers and officers. A recent Army survey found that on third and fourth tours one in four soldiers suffers mental and psychological health problems. Medical specialists say that psychological and mental illnesses will take many years to treat and cost billions of dollars. The specialists bemoan an incompetent medical system that is not equipped to provide long-term care for a large number of wounded and tormented soldiers.

Many U.S. soldiers have served three or four tours in Iraq and their deployments have been extended from a year to 15 months, with only a year at home between tours. No wonder then that soldiers and officers alike feel the strains and pain of long tours on the front lines away from home. They are tired, exhausted, and drained.

Already the post-psychological and mental effects of the war in Iraq are being felt and heard in increasing suicide rates among Iraq veterans and more cases of domestic abuse, particularly among spouses. Never before have so many U.S. veterans, along with their families, suffered the trauma of a prolonged, lethal war.

Soldiers and officers recount their horror experiences while serving in Iraq, but their nightmares have not ended on returning home. To their dismay, once they got back, they found broken homes, broken marriages and relationships, and messed up finances. Their lives were shattered.

In addition to the human costs, the war in Iraq appears to have drained the morale of the U.S. Army. The erosion of U.S. public support for the controversial war has exacerbated the predicament of individual soldiers..

It is worth stressing that many in the senior echelons of the U.S. Army initially opposed the invasion of Iraq, dreading its potential repercussions. In contrast to civilian officials and policymakers in the Defense Department and the White House who were driven by ideology, military leaders knew well what the war would entail in blood and treasure. Unlike their civilian counterparts, military warriors were not blinded by wishful thinking and ideological hubris.

The irony is that the Army’s nuanced stance goes against historically entrenched stereotypes that portray warriors as gung ho on waging endless wars. The U.S. Army has exhibited good judgment about Iraq in comparison to the reckless Bush administration.

Although the U.S. Army succeeded in swiftly toppling the Saddam Hussein regime, it got bogged down in Iraq’s shifting sands. The five-year-old conflict has proved a costly one. In addition to the rapid destruction of materiel and the loss of thousands of men and women, the Army, without draft, has faced daunting shortages in manpower. While the number of active-duty troops has expanded by 65,000 for a total force of 547,000 since the war begun, the U.S. Army is overextended around the globe.

Military commanders say that they doubt if the Army could fight another major war, and that the Air Force and Navy would likely be in charge if another war were to break out. Soldiers are tired and badly need a break, commented a former general who advocates orderly withdrawal of U.S. troops from Iraq.

Most important of all are the moral strains inflicted on the U.S Army because of widely-reported violations of human rights and torture of Iraqi prisoners in Iraq.

In conversations with Iraqi and Arab activists and leaders over the last three years, I have been told that U.S. soldiers “raped Iraqi women and boys.” Although such claims are groundless, they are wide spread in the Middle East and pour gasoline on a raging fire. Such claims have enraged Muslim public opinion against the U.S. and mobilized many young Muslims to take arms against the coalition forces in Iraq.

The apparent violations of Iraqi human rights by some U.S. soldiers have tarnished the reputation of the Army. Certainly American generals are fully aware of the significance of the debilitating effects of the war in Iraq on both the status of the Army and its deterrence power against a country such as Iran. One top U.S. general was so enraged against civilian leaders in the Defense Department that he reportedly used the “F” word against their meddling in internal military affairs.

In my recent lectures at U.S. military colleges, I have encountered junior and senior officers who express critical views of the American-led invasion and occupation of Iraq. Far from shying away from discussing the war and its repercussions, these officers say that the war was a mistake, even though they make it clear that they respect their Commander-in-Chief’s decision. Indeed, what I have found most impressive in my conversations with U.S. officers is a new recognition that the United States must begin extracting its forces from Iraq—the sooner the better.

The good news is that the next U.S. President will find considerable support among Army officers for an orderly military disengagement from Iraq.

Fawaz A. Gerges holds the Christian A. Johnson Chair in International Affairs and Middle Eastern Studies at Sarah Lawrence. His most recent book is The Far Enemy: Why Jihad Went Global (Cambridge University Press). Photo: Baghdad, June 16, 2007 (Cherie A. Thurlby / Department of Defense).