When William F. Buckley, Jr., died last month, the eulogies came from both sides of the aisle. The testimonials from the right were predictable; more interesting was the praise that came from serious, thoughtful progressives. Jeet Heer wrote of Buckley’s “basic decency” and of his “life-long capacity to change, adapt and learn.” Hendrik Hertzberg wrote that Buckley “could not have been happy with the vulgarity of the movement he did so much to spawn.” Rick Perlstein described him as “a good and decent man” who “did the honor of respecting his ideological adversaries, without covering up the adversarial nature of the relationship in false bonhomie.” 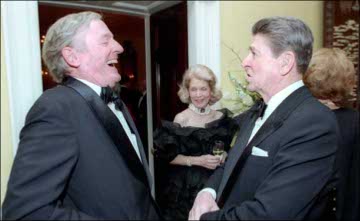 This was not the Buckley I remembered. But then again, I hadn’t really paid much attention to him since the early 1970s, when, as a teenager, I used to watch Firing Line. To refresh my memories, I went to YouTube and looked up a few of his conversations. One of the first conversations that came up was his famous exchange with Gore Vidal, when they were both employed by one of the television networks to comment on the 1968 conventions. After Vidal thoughtfully called Buckley a crypto-Nazi, Buckley replied, “Now listen, you queer, you stop calling me a crypto-Nazi or I’ll sock you in your goddamn face and you’ll stay plastered.”

Remembering that this outburst is widely regarded as uncharacteristic of him, I looked at another video: a Firing Line debate between Buckley and Noam Chomsky in 1969. I had never seen the debate before, but here was the Buckley I remembered. As Chomsky tries to make the case that the war in Vietnam was neither an example of good intentions on the part of the U.S. nor an aberration from the normal lines of American foreign policy, Buckley simply doesn’t let him finish a sentence. Instead of letting Chomsky make his argument and responding to it, Buckley keeps peppering him with irrelevancies, quibbling with every sentence fragment that Chomsky utters as if the fragment represented Chomsky’s entire case. Despite his reputation as a fearsome debater, Buckley was considerably less than that: he was a professional subject changer, indistinguishable in his mode of argument from noisier descendants like Bill O’Reilly and Tucker Carlson.

By the end of the discussion, Buckley’s fabled civility had failed him yet again, as he offered to sock Chomsky, too, in the face. But this, after all, was 1969; most of the eulogies from the left spoke of the way Buckley had grown near the end of his life.

Firing Line went off the air a long time ago, so in order to get a feeling for Buckley in his last incarnation, I spent a few hours reading some of the columns he’d written in the last few years. In one of his last columns, titled “Edwards Hate-Talk,” Buckley quotes John Edwards to the effect that “President Bush honors and respects only wealth.” Buckley replies: “What? When did that happen? Bush has never turned his eyes or his concerns away from what Mr. Edwards would call ordinary Americans.” After obligatory remarks about Edwards’ haircut, Buckley tells us that Edwards is giving us “political rhetoric of the kind we got a generation ago…from conniving communists.”

In a column about Barack Obama, he is disappointed by Obama’s statement, “I simply believe that those of us who have benefited most from this new economy can best afford to shoulder the obligations of ensuring that every American child has a chance for that same success.” Buckley finds this “mischievous,” explaining that “there is nothing, nothing that the state can do to replicate Obama’s success for a million others.”

In another column, commenting on a debate between Obama and Hillary Clinton, Buckley summed things up this way: “‘Health care should be universal,’ said Hillary. Obama might have answered, ‘Success in the stock market should be universal.’ But there isn’t anything a president can do to secure that…”

So any call for government action to make social and economic conditions more equitable and less harsh was met by Buckley in the same way: he assured us that nothing can be done. Social Security? Medicare? The GI Bill? Unemployment insurance? The right to organize? It’s as if he never got the news.

Buckley evidently had great personal charm in his face-to-face, off-camera relationships, but his reputation as a political thinker was ludicrously undeserved. A question for Buckley’s admirers: Can you point to a single example of his attempting to take an opponent’s arguments seriously, to respond to an opponent’s arguments in their strongest version? Perhaps there’s an example of his having done so, but I’ve been unable to find it.

Brian Morton’s most recent novel is Breakable You. His earlier novel, Starting Out in the Evening, has been made into a movie starring Frank Langella and Lauren Ambrose. Photo: William F. Buckley with President Reagan in 1986 (Reagan Presidential Library / Wikimedia).