IN AN essay in the recent book Shalom Neuman, art critic Robert C. Morgan labels Neuman’s art “humanism in exile,” and describes him as “a kind of artistic renegade” who “wants to remain outside the fray, and beyond the superficial machinations of the market. There is no doubt that he would like collectors to buy his work, but he is repulsed by the notion that investors would speculate on the profit they would make from it.”

Neuman is indeed an artistic renegade, but not just in terms of his feelings about the commercial gallery system. His art is colorful, playful, and often imaginative in a way that reminds one of the extremes of surrealism. But it’s also a committed art that crosses boundaries, incorporates a conceptual framework embracing political and social ideas, and never abandons a critique of everything in our contemporary cultural environment that debases the human spirit. This is not unheard of in today’s art world, but it is increasingly rare in a culture where, as Gary Indiana wrote in Andy Warhol and the Can that Sold the World, “financial success [is often seen] as the measure of any artistic activity’s value.”

Color, playfulness, and imagination are all evident in a major exhibition in Prague focusing on Neuman’s work this summer and fall, “The Art of Fusion Art: Talking at You,” on view at the National Gallery (August 19 to September 18), the American Center (September 6 to September 30), and Galerie La Femme (September 21 to 30).

Neuman explains fusion art as a reaction to “what most artists for the past 2000 years have been doing”: replicating reality “as they see it.” Neuman argues that

a two-dimensional surface with illusionary painted space doesn’t replicate reality because we are multi-sensory brings. We don’t just see the world; we smell it, we taste it, we hear it, we feel it through our tactile senses. I believe that today we have the technology and ability to convey all that artistically. To me it’s almost intuitive that we have to develop the disciplines that will allow us to represent the world in all its complex reality.

His Wall of Cultural Confusion, for example, features a “combination of found objects—plastic and electronic toys—whose designs probably originated in the Western World, which were mostly likely produced in factories in China or elsewhere in Asia and sold in the United States, and which were eventually discarded by consumers as no longer of practical use and picked up by me for use in my art.” Wall of Cultural Confusion makes uses of acrylic paint on plywood, looped soundtracks, and incandescent light, which together form “an instrument that plays music when you press the right buttons.” The artwork is “the byproduct of many cultures artistically and physically, and intended to appeal to several of our senses.” 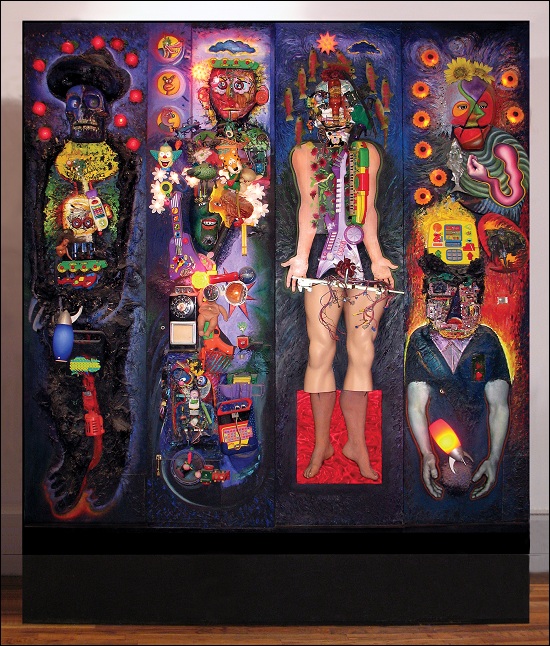 Artists of similar-seeming works would likely reference Marcel Duchamp, Kurt Schwitters, Jean Tinguely, or Robert Rauschenberg, or theories of objective, nonobjective, or conceptual art. Neuman’s ideas depart from those passed down in art schools or art history books, and instead refer to realities we run up against every day: technology, economic interdependence, environmental concerns, consumerism, and recycling.

BORN IN Prague soon after the Second World War to parents who had survived the Holocaust, Neuman and his family moved to Israel when he was an infant, then to the United States, where he has lived ever since. With the exhibition in Prague, Neuman is returning not just to his birthplace (where he keeps a second apartment) but to a city rich in Jewish history. That heritage has played its part in Neuman’s art in several ways, most notably in a number of assemblages he has created over the years that he calls his “Golems” (none of which, unfortunately, are included in the retrospective). 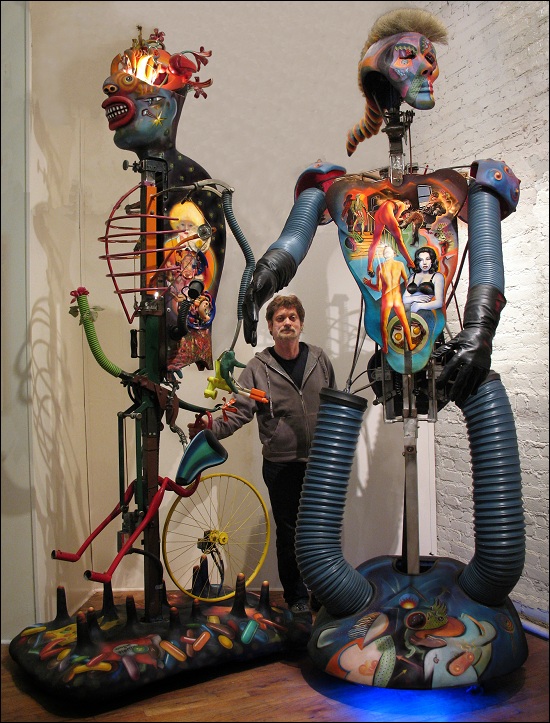 In Jewish folklore, the Golem was an inanimate creature given life through mystical means. The most famous Golem narrative revolves around Prague in the sixteenth century and its then-chief rabbi Judah Loew ben Bezalel, who created one of these creatures to protect the Jewish community in the city from pogroms initiated under the Holy Roman Emperor Rudolf II. Neuman’s Golems are large-scale (nine to thirteen feet high), multi-sensory constructions sporting moving parts, lights, and sounds that are indeed quite imposing. Jews these days have nothing to fear in Prague; Neuman’s Golems, rather, recall a history of anti-Semitic violence in Europe that during the Second World War all but wiped out his extended family. Indeed, while the Golems most explicitly bear the influence of Neuman’s Jewish heritage, it is also evident in the political and social critiques embedded in his art, as well as in his conception of the interrelatedness of all things cultural, economic, and technological. His work draws on the Jewish notion of “tikkun olam,” or “repairing the world”—interpreted now as a call to social justice.

Neuman draws on another part of his heritage in his “Amerika” series, on view at the Veletržní Palac division of the National Gallery. The spelling—with the German “k”—implies a displaced point of view, one that Neuman clearly took up when he created the pieces, a collection of portraits of imaginary individuals. 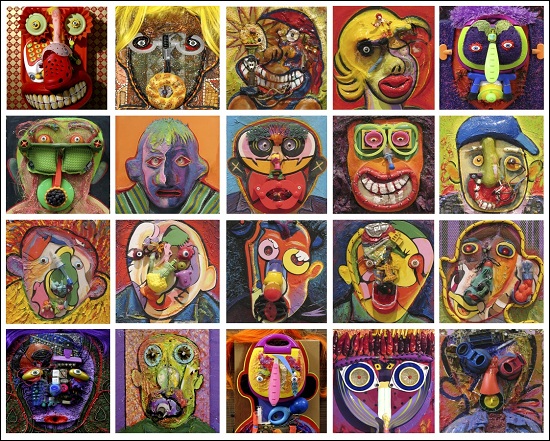 Conventional portraiture usually involves capturing the likeness of a person—not just the face, but also the individual’s clothed or unclothed body and surroundings—as a way of suggesting something about the person’s background, personality, and life. In some portraits, like many of those by fin-de-siècle Viennese painter Gustav Klimt, the larger world seems to overwhelm the individual, with face and body almost submerged within the physical environment the person inhabits in the painting. Neuman’s Amerika portraits, on the other hand, are mostly faces, with the barest hint of bodies—but the faces themselves are mostly made up of objects: a small plastic toy or marble serving as an eye, a badminton birdie or syringe as a nose, a bent toy stethoscope as a mouth. In Neuman’s portraits, the subjects are not just surrounded by objects, but in some sense are the objects—the products of consumerism run amok. These works are at first glance quite whimsical, but on careful inspection appear more than a little sinister.

NEUMAN’S ART thrives on a productive tension between its surface gaudiness and technological flair, and its underlying political and social content. It’s disturbing art, and meant to reflect the disjointed times in which it was created. Neuman’s work involves plastic toys, flashing lights, electronics, and talking machines, and so might seem to depart from the style of earlier, also intentionally disturbing, politically trenchant works by artists like Francisco Goya, or the expressionists of Weimar Germany. But his world—our world—confronts a set of problems peculiarly its own, so it’s no surprise he chose to use materials that are peculiarly our own as well.

Likeability, popularity, and commercial success are often secondary considerations for artists who feel compelled to create art that bears witness to the confusion and destructive tendencies of their times. Indeed, Neuman’s art bespeaks a desire to communicate, and even to persuade. Perhaps nowhere is this clearer in Neuman’s oeuvre than with his involvement in action art through the Performance Artists’ Network (PAN), which moves out of the gallery and onto the streets. Neuman’s action art is also being spotlighted in Prague, with live performances at most of the venues as well as videos of actions he has carried out in the past.

Yet Neuman believes that art only rarely transforms those who encounter it. “Art responds to what we see, what we experience,” he said. “Artists are like antennas. I believe they need to absorb through every part of their bodies, through the ports of their bodies, what is really happening.” He thus places the onus of transformation on the viewers. They decide how the vision embedded within the art is to speak to them, educate them, and change their perceptions of the world.

This is why Robert C. Morgan describes Neuman’s art as “humanism in exile”; it asks that we learn to experience the world and think for ourselves about its beauty, its meaning, its problems, and their solutions. Neuman’s work may be in exile from an art world that tends to see art merely as a commodity. But it challenges us to confront our lives, our history, our society, and our humanity so that we no longer live in exile from ourselves.

Lester Strong is the special projects editor for A&U magazine. He is a regular contributor to the Gay and Lesbian Review, and his writings on the visual, written, and performing arts have appeared in many publications, including Out magazine, the New Mexico Historical Review, and the South Dakota Review.

Composite of twenty of Neuman’s “Amerika” portraits, used as a poster for the Prague exhibition. Each original: 22 by 20 by 7 inches; acrylic on plywood with found objects and sound chips.