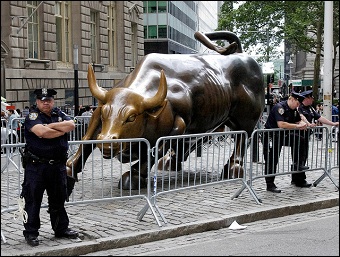 “I’m so scared of this anti-Wall Street effort. I’m frightened to death,” Frank Luntz, an influential GOP pollster and strategist, warned the Republican Governors Association at a meeting in Florida last month, referring to the Occupy movement. “They’re having an impact on what the American people think of capitalism.”

The approval figure for socialism is even larger than the results of polling from May 2010, where 43 percent of eighteen-to-twenty-nine year olds registered positive feeling for socialism. (This put it in a dead heat with capitalism).

These findings are particularly remarkable because there’s been no significant socialist movement in this country for decades. After Barack Obama was elected president in 2008, the word “socialism” started making a comeback. But it wasn’t because the socialists were gaining momentum. It was because Obama’s opponents—the Republican Party, the Tea Party, the right-wing blogosphere, the Chamber of Commerce, and conservative media gurus like Glenn Beck, Ann Coulter, Sean Hannity, and Rush Limbaugh—labeled anything Obama proposed, including his modest health care reform proposal, as “socialism.”

In March 2009, two months after Obama took office, the National Review put a picture of the new president on its cover over the headline, “Our Socialist Future.” In 2010, Stanley Kurtz, a regular contributor to conservative publications and frequent guest on Fox News, published Radical-in-Chief: Barack Obama and the Untold Story of American Socialism. That year Newt Gingrich authored To Save America: Stopping Obama’s Secular-Socialist Machine. During his presidential campaign he’s continued to use that label to attack Obama.

This primary season, in fact, every GOP candidate has attacked Obama for being a socialist, or for trying to make America more like Europe, which has become a code word for socialist. In South Carolina, Mitt Romney pledged to “stuff it down [Obama’s] throat and point out it is capitalism and freedom that makes America strong.” At the same time, Romney’s GOP rivals have attacked his business practices at Bain Capital, unwittingly turning their party primaries into a debate over—and defense of—capitalism.

Dick Flacks, a sociologist at the University of California at Santa Barbara who has studied the political views of America’s youth, thinks that right-wing attacks on Obama may have backfired with respect to the Millennial generation. “Young people generally like Obama, even if they are somewhat disappointed in what he’s accomplished so far,” said Flacks, who noted that in 2008 66 percent of under-thirty voters favored Obama. “So when Beck or Gingrich attack Obama as a socialist, many young people react by saying, ‘Well, then maybe socialism can’t be that bad,’ and it makes them at least skeptical of those who demonize the word socialism.”

The Pew survey doesn’t provide an in-depth study of Americans’ political ideologies. “We didn’t ask people to define what they mean by the terms,” said Carroll Doherty, Pew’s Associate Director, in an interview. In addition to “capitalism” and “socialism,” Pew asked respondents for their reactions to “libertarian,” “liberal,” “conservative,” and “progressive.” Among these terms, “progressive” had the biggest positive (67 percent) and smallest negative (22 percent) responses in the overall public. “Progressive” garnered an even stronger positive (88 percent) and a smaller negative reaction (12 percent) among Millennials. Among young Americans, all the other terms scored better than the word “capitalism.”

Most Americans over fifty today think of socialism in terms of the Soviet Union, according to Schwartz. “That was the Cold War view. Socialism was identified with Communism, which meant totalitarianism and dictatorship. It wasn’t a very positive image,” says Schwartz. “But things have changed since the Berlin Wall fell in 1989. If young people have any image of socialism at all, it is probably northern Europe, particularly Scandinavia. They know that northern Europe has less poverty, more equality, and more social mobility.”

The high unemployment rate among today’s youth, and the enormous increase in debt owed by college students and recent graduates, has something to do with their growing doubts about capitalism. So does their uncertainty about their own future and the country’s future.

Anger, or at least lukewarm feelings, toward capitalism hasn’t led to a groundswell of socialist activism. Only a handful of visible public figures—including Senator Bernie Sanders of Vermont, writer Barbara Ehrenreich, theologian Cornel West, and sociologist Frances Fox Piven—publicly identify themselves as socialists. Democratic Socialists of America, the nation’s largest socialist organization, has 6,500 dues-paying members. The group’s youth section has solid chapters on only fifteen campuses and about 300 active members.

A better reflection of young people’s disaffection with capitalism is the Occupy Wall Street movement, which was mainly fueled by people in their twenties and thirties, many of them political neophytes. Even many Americans who don’t agree with the Occupiers’ tactics or rhetoric nevertheless shared its indignation at outrageous corporate profits, widening inequality, and excessive executive compensation side-by-side with the epidemic of layoffs and foreclosures.

Another Pew Research Center survey released in December 2011 found that most Americans (77 percent)—including a majority (53 percent) of Republicans—agreed that “there is too much power in the hands of a few rich people and corporations.” Not surprisingly, 83 percent of eighteen-to-twenty-nine year olds shared that view. Pew also discovered that 61 percent of Americans believed that “the economic system in this country unfairly favors the wealthy.” A significant majority (57 percent) thought that wealthy people don’t pay their fair share of taxes.

The Occupy movement has changed the national conversation on these issues, among the public and in the media. For example, between October 2010 and September 2011, the number of newspaper stories with the word “greed” fluctuated between 452 and 728 per month. But in October, only weeks after the Occupiers gained a foothold in New York and elsewhere, newspapers ran 2,285 stories with that word. A similar trend occurred with the word “inequality,” according to a Lexis/Nexis search.

Some politicians and pundits have suddenly changed their rhetoric to give voice to the growing anger toward Wall Street and big business. In his December 5 speech in Osawatomie, Kansas, Obama sought to channel the growing populist outrage unleashed by the Occupy movement. He criticized the “breathtaking greed” that has led to a widening income divide. “This isn’t about class warfare,” he said. “This is about the nation’s welfare.” Obama noted that the average income of the top 1 percent has increased by more than 250 percent, to $1.2 million a year. He returned to those themes in his January 24 State of the Union address, where he called on Congress to raise taxes on millionaires. “Now, you can call this class warfare all you want,” he said, “Most Americans would call that common sense.”

Obama also recently sent Alan Krueger, head of his Council of Economic Advisors, to make an unprecedented presentation to the Center for American Progress about the dangers of growing income inequality, declining wages, and stagnating social mobility. Many Democrats running for Congress this year will hitch their campaign to these themes, even if they don’t directly give credit to the Occupiers for putting these issues on the nation’s agenda.

But nowhere can the impact of the Occupy insurgency be better seen than in the fumbling efforts of Romney’s GOP rivals to capture the new anti-corporate sentiment. The Republicans are trying to figure out how to tap into the national mood without sounding too anti-business and offending their corporate sponsors. They’re finding that it’s a difficult tightrope to walk.

From 1984 through 1999, Romney ran the Boston-based Bain Capital, which, according to a Los Angeles Times investigation, made billions by “firing workers, seeking government subsidies, and flipping companies quickly for large profits.” According to the Times, “Sometimes Bain investors gained even when companies slid into bankruptcy. Romney himself became wealthy at Bain. He is now worth between $190 million and $250 million, much of it derived from his time running the investment firm.”

(Perry was referring to the Holson Burnes factory, which made photo albums and picture frames. In 1992, just four years after the factory opened, the Bain-controlled firm fired more than 100 workers and shipped some of the operation overseas).

“I think there’s a real difference between people who believed in the free market and people who go around, take financial advantage, loot companies, leave behind broken families, broken towns, people on unemployment,” Gingrich said on Hannity’s show. On the campaign trail, Gingrich told a crowd, “Crony capitalism, where people pay each other off at the expense of the people of this country, is not free enterprise, and raising questions about that is not wrong.” Voters should know, Gingrich argued, whether businesses are “fair to the American people, or are the deals being cut on behalf of Wall Street institutions and very rich people.”

At a South Carolina debate Romney turned that phrase on Obama, accusing the president of “crony capitalism.” Obama, he said, “is taking our country down a path that is very dangerous. He’s making us more and more like a European social welfare state. He’s making us an entitlement society. He’s taking away the rights of our citizens. He believes government should run this country.”

The attacks on Romney have triggered a backlash by some conservatives. They don’t like to hear fellow Republicans vilifying capitalism and the profit motive. Republicans and conservative pundits have recently become fond of quoting economist Joseph Schumpeter, who argued that capitalism involves “creative destruction” that can take a human toll but ultimately promotes innovation and economic growth. This has become the justification for Bain Capital’s predatory practices.

The business-oriented Club for Growth called Gingrich’s critique of Romney’s work at Bain “disgusting” and “just beyond the pale for any purported ‘Reagan conservative.’” The right-wing American Spectator magazine added that Gingrich’s attack on Romney’s Bain experience was an “attack on capitalism itself, something that should be anathema to a self-described ‘Reagan conservative.’” On his radio show, Glenn Beck said that Bain has become the “new Halliburton—the company that has done nothing wrong yet is completely vilified merely for being a company that attempts to earn a profit.” The widely read conservative blogger Roger Simon, who had earlier supported Perry and then Gingrich, wrote, “This basically anti-market propaganda from Perry would more normally come from a Norwegian socialist.”

Even Romney’s opponent Rick Santorum (who may want to be Romney’s running mate) refused to join the pile-on against the former Massachusetts governor. “[I] just don’t think as a conservative and someone who believes in business that we should be out there…saying somehow capitalism is bad,” he said.

“The Republicans seem to be saying that any criticism of the rich, or of big business, is anti-capitalist,” observed sociologist Flacks. “This is new in American politics. And it is dangerous for conservatives and Republicans. It provides an opening for a real debate about the nature of capitalism and about how we can bring more democracy to our economic system.”

Frank Luntz agrees. He offered tips for fighting back and framing the issues that the Occupiers have raised. For example, he urged Republican politicians to avoid using the word “capitalism.”

“I’m trying to get that word removed and we’re replacing it with either ‘economic freedom’ or ‘free market,’” Luntz said. “The public…still prefers capitalism to socialism, but they think capitalism is immoral. And if we’re seen as defenders of quote, Wall Street, end quote, we’ve got a problem.”

Peter Dreier teaches politics and chairs the Urban & Environmental Policy Department at Occidental College. His next book, The 100 Greatest Americans of the 20th Century: A Social Justice Hall of Fame, will be published by Nation Books in the spring.