The latest numbers on union membership in the public and private sectors are not pretty. The long offensive against labor—abetted by right-to-work laws in the states, employer opposition largely unchecked by state or federal law, and renewed legal and political attacks on basic bargaining rights—has driven union membership to lows not seen since Andrew Carnegie owned the largest steel company in the world. The share of all workers belonging to a union, 10.5 percent, is now about where it was at the turn of the last century. The share of private-sector workers belonging to union, 6.4 percent, is now lower than it was in 1890. 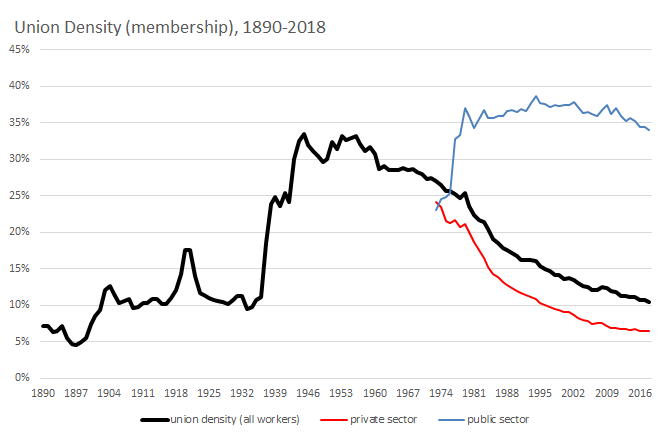 These numbers are especially telling when we break them down by sector and geography. The graphic below traces union density (the share of workers belonging to a union or covered by a union contract) by state and by major economic sector since 1983 (the first year such data is available through 2018).

In this dismal catalog of downward-sloping trend lines, a few things stand out. Private-sector union density fell by half to two-thirds over this span regardless of the setting or the starting point—from 24 percent to 13 percent in New York, or from 7.1 percent to 2.4 percent in Mississippi.

Public-sector unions have buoyed the labor movement in recent years, but their reach is uneven. In eleven states, public-sector union density exceeds 50 percent. But in twenty-seven states public sector density is less than 25 percent. These rates are flat in most settings, but there are steep dips in recent years in those states (like Iowa and Wisconsin) where public sector bargaining rights have been strangled.

These numbers are sobering, but they are not a death knell. The Los Angeles teachers’ strike demonstrated both the power of collective action and broad public support for labor’s goals. The assault on workers’ rights has made organizing more difficult but also more urgent and more visible. Fully three-quarters of new union members in 2017 were under the age of 34, a hopeful trend that signals some pushback from younger workers facing often dismal and insecure working conditions. “Don’t waste any time mourning,” as the labor organizer Joe Hill wrote from death row in 1915 (a year in which union density was about the same it is today), “Organize!”