Only fools will now believe that Hosni Mubarak and his cabinet can be trusted to implement democratic reforms in good faith. The pages of eminently unradical newspapers like the Washington Post and the New York Times have laid responsibility for yesterday?s violence in Cairo on the president?s doorstep, claiming that Mubarak had unleashed chaos and struck back at his opponents. It certainly seems as though yesterday?s waves of attacks on Tahrir Square?s pro-democracy demonstrators?from whip-brandishing thugs on horses and camels, to automatic gunfire, to a hailstorm of Molotov cocktails?were more than a spontaneous outpouring of affection for an unjustly maligned regime. 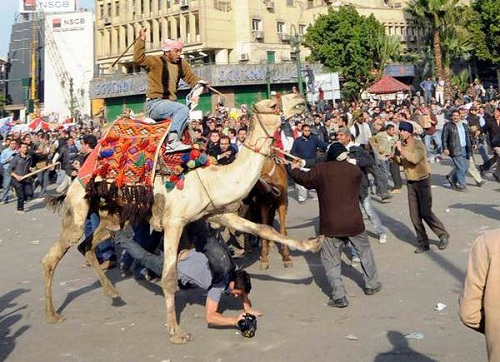 A statement released today by Human Rights Watch takes this violent turn as potentially justifying withdrawal of Western military support. It makes two major claims. First, it suggests what every undeluded observer must know: that the government likely organized the violence of February 2. As director Kenneth Roth puts it, ?It boggles the imagination that armed pro-Mubarak demonstrators on camels and horseback could have assembled themselves and passed through army checkpoints without government complicity and coordination.?

But the release from Human Rights Watch also argues that the army was inexcusably negligent in protecting peaceful protesters. Even if we suppose that Mubarak did not summon the thugs and bullies of the sort that he employs regularly during elections, we must acknowledge that the army took no active steps to protect unarmed citizens exercising their right of protest:

The United States and the European Union should use their leverage with the Egyptian government to ensure that there is no further violence against peaceful protesters…They should tell President Hosni Mubarak and Egypt’s military commanders that the army’s actions on February 2 raised serious doubts about its willingness to protect pro-democracy protestors from violent attacks, and that their failure to uphold fundamental human rights, including prohibitions on extrajudicial killings, torture and enforced disappearances, will prompt an immediate suspension of all military assistance.

Those who equip and train an army complicit in the murder and intimidation of its citizens, this argument runs, are themselves complicit in that murder and intimidation. The simple fact that the Egyptian military stood passively by, and indeed left Tahrir Square overnight, while peaceful protesters were whipped, stoned, and shot is reason enough to cut off the military funding that is the chief form of life support for this octogenarian autocrat.

It is an argument that should lay to rest the sort of feigned neutrality emerging from the White House. (Saying that future leadership can only be decided by the Egyptian people sounds reasonable enough, but doesn?t stand up to scrutiny when American tanks are rolling through every major city in Egypt.) That the United States is playing an active hand in these events is undeniable. We shall see how bloody it allows that hand to become.