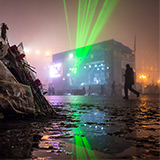 In the early days, the Maidan protests had been something like a people’s national liberation festival. But by 2014, with war erupting in the east, euphoria and solidarity had been replaced by grief and anger.