Workers must build durable collective identities on their own behalf, and unions must institutionalize that social solidarity.

Two new histories show how the CIO of the 1930s and ’40s led the charge for racial equality not just on the shop floor but at the national level, precipitating the Democratic Party’s embrace of civil rights.

This will likely be seen as one of the most consequential presidential elections in American history—above all, in institutionalizing the GOP as an unchecked vehicle for racism, nativism, anti-Semitism, and misogyny.

The cultural-political influence of unions is rising even as membership declines. 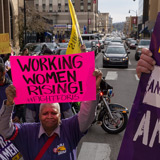 Labor needs to argue more. Unions always need solidarity, but it should not be the solidarity of the stolid and defeated.

As historian Steve Fraser sees it, we should look toward the “long nineteenth century” for inspiration in constructing a new, lasting American resistance to capitalism.

Lane Kenworthy delivers a crisp manifesto for an “American” version of social democracy. But can his vision transcend Republican extremism, union decline, and our country’s racial heterogeneity?