Emmanuel Macron’s recent eight-hour debate with dozens of academics follows a long line of French leaders who champion intellectual discourse. But you can’t read your way out of a crisis.

Amid disenchantment with mainstream politics, tensions between Socialists and Greens, and a string of disappointments from outgoing president François Hollande, activists known as zadistes have taken the defense of the environment into their own hands—and met formidable police repression. 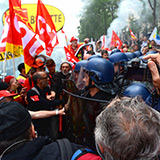 This summer, France’s Socialist government quashed the country’s largest wave of strikes of protests in a generation to impose a drastic overhaul of French labor law, revealing deeper fault lines in the process.

By now much of the world has heard of Toronto’s mayor Rob Ford. But the real story in Toronto is not Rob Ford. How did one of North America’s most diverse cities in one of the west’s most robust democracies come to elect a right-wing populist?

Lawrence Summers’s celebration of the global reach of English can only be read as an unabashed apology for American empire. By even the most strategically hard-headed criteria, however, cadres drawn from a monolingual American elite are a poor choice as ambassadors of U.S. interests.

With a steep recession in full swing, it’s French-bashing time again on the editorial pages and in the business sections of American newspapers. As the Obama administration frantically weighed policy options, pundits agonized over the prospect of the U.S. government’s …