A series of short essays on the coronavirus pandemic. 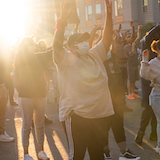 Unwavering solidarity with and participation in this struggle for black freedom is a moral and political imperative—with the potential to transform the landscape of American radicalism.

Katrina Forrester’s In the Shadow of Justice explores the world that shaped the ideas of John Rawls, and how his work remade political philosophy. Is there still room for his liberal egalitarianism in an age of ideological ferment and social conflict?

As the deadening pall of national security discourse once again falls over the United States, we need to hold onto the shock and outrage of these first hours.

In our extremely online political times, content moderators have been cast as central players in the fight for democracy, whether as its antagonists or its delinquent guardians.

Nick Estes discusses the deep historical roots of the convergence at Standing Rock, why Indigenous peoples have taken a leading role in the climate justice movement, and why decolonization must be part of any left-wing agenda.

The road from critique to power is long and difficult, but the effervescence of the left-wing political imagination indicates how seriously socialists take this challenge.

A forced exodus haunts a border town’s past. Can a new documentary force a reckoning?

Why the titans of Silicon Valley—long tied to the Democrats—have been warming up to Trumpism.

A new set of reality shows thrive on foreclosed property and unpaid bills; they promote a bargain-basement ethos where everything has a price, and where discovering and comparing those prices is a source of pleasure.