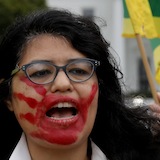 Turkey’s invasion of northeastern Syria is a terrible blow for the international left.

The Kurds of northern Syria are building an enclave of radical democracy and feminism in the middle of a devastating war—and beating back ISIS in the process. Why aren’t more leftists paying attention?

A secure, well-run Palestinian state is more essential than ever, for the sake of justice and for the security of both sides.

On June 11, following threats by Turkey’s PM Erdogan that demonstrators who held out would “pay a price,” an overwhelming force of 20,000 riot police, complete with agents provocateurs throwing Molotov cocktails, cleared Gezi Park in scenes reminiscent of Occupy Wall Street. Like OWS, …

Left-wing alliances with fundamentalist groups are betrayals of the majority of their co-religionists, who do not wish to be represented by extremists. Such alliances are also betrayals of basic socialist principle.

An earlier version of this ran at openDemocracy last week, before tens of thousands marched in Benghazi to demand the dissolution of Islamist militias—a demand soon supported by the Libyan government. The plot line could have leapt from the baroque …

Meredith Tax: The Human Side of ?Human Rights?