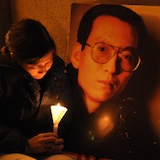 As the world mourns the death of Liu Xiaobo, we mustn’t forget that dissent in authoritarian states, not only in China, occurs in the realm of the ordinary.

As I was heading to Lynn, Massachusetts to celebrate the seventieth anniversary of the end of the Second World War with my eighty-seven-year-old Russian grandmother, the last thing on my mind was the war in Ukraine, and what it might mean for the commemoration of this event today.