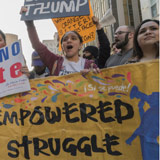 Pan-Latino identity, once the result of a sort of strained political imagination, is increasingly real—and recognizing its potency will be central to building a new progressive movement in the United States.

Since the 1990s, immigrant and labor activists in Los Angeles have worked together to build a powerful progressive movement.