Introducing our Fall 2020 special section, “Technology and the Crisis of Work.” 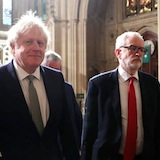 Today’s crises call on humanity to act collectively, but this possibility seems more and more remote. How do we break the cycle? A dialogue.

In late October 2012, twenty-one activists calling themselves “No Dash for Gas” scrambled up a power station to hold a sit-in three hundred feet up in the sky. Their actions put them at risk of becoming the first British climate activists to be sent to jail. It also revealed troubling collusion between energy companies and the police.