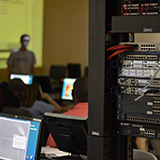 Today’s embrace of “innovation” in higher ed advances the interests of the business elite over those of educators or students.

J. Williams: A Seminar on Broadway

In the Fall 1991 issue of Dissent, Richard Rorty published an essay called “Intellectuals in Politics.” It was not a profile of model figures but something of a jeremiad, castigating American intellectuals for their disconnection from politics and standing by …

Jeffrey Williams: The Culture of Disgruntlement