Absent a sufficient level of density to carry the swing states, unions are seeking to turn out not just their own members but sympathetic communities as well.

Going left on economics plays not only in the liberal cities but also in many of the suburbs and farms. It’s the key to the Democrats’ electoral success moving forward. 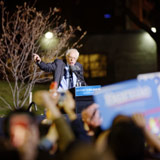 The young activists who campaigned for Bernie Sanders are clearly the Democrats’ future. Do they have the power and the smarts to remake the Democratic Party? 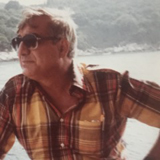 The first time I heard Bogdan Denitch speak, he intimidated the hell out of me. That wasn’t, I hasten to explain, his intent. Far from it. The occasion was a national board meeting of the Democratic Socialist Organizing Committee in … 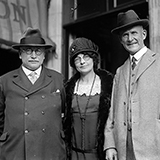 If Bernie Sanders’s presidential run is to herald a new socialist movement, American leftists will have to overcome the combination of sectarianism, repression, and cooptation that doomed their predecessors.

In the spring of 1995, when Lane Kirkland’s old order was toppling and John Sweeney’s young(er) Turks were poised to revitalize the American labor movement, one of the movement’s leading operatives gave me his take on what was behind the …

Peter Beinart’s The Good Fight: Why Liberals – and Only Liberals – Can Win the War on Terror and Make America Great Again

Democrats Agree on How to Play Defense, but What Are They Fighting For?