The YIMBYs pair winning political strategy with an inclusive program that will bring relief to victims of the housing crisis across the board.

A reply to Jacob Woocher and Shanti Singh.

Housing debates have long been a mess of ideological contradictions. A far-reaching new bill in California, which would allow for denser construction in areas served by transit, begins to unscramble them.

Why do they keep marching off the same cliff? Instead of one doomed, issueless campaign after another, the Democrats need a new class politics. 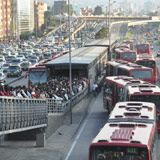 Since the early 2000s, when the Shell-backed EMBARQ began promoting bus rapid transit (BRT), a wide range of philanthropists and transit advocates have seized on the “technical fix,” which promises to solve a recognized problem without challenging the power relationships that created it. 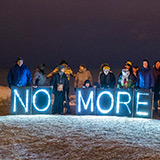 From apple orchards in the 1930s to Flint today, lead poisoning—and politicians seeking to cover it up—have a long history in the United States.

At the end of the Yonkers fair housing battle depicted in the new David Simon mini-series Show Me a Hero, 200 poor black and Latino families were housed on the affluent side of the city. But a quarter-century later, a long-standing pattern of residential segregation and concentrated poverty persists nationwide.

Establishment economists insist that they don’t second-guess consumer preferences. You are, they say, your own best judge of what’s good for you. But not if you like to travel by train.

How America’s suburbs are engineered against the walking poor

Blocking new development does not stop renovation and displacement.

The federal transportation fund is running out of money, threatening the country with potholes, stopped construction, and economic downturn. Congress, which has kept the program solvent with short-term patches for years, now finds itself unable to do more than buy …

Nothing, it seems, says anti-establishment these days like the demand for a cheap place to park your car. New York’s last bohemian, the Times tells us, flees a city ruined by gentrification. High on “outlaw artist” Clayton Patterson’s list of complaints, right …

Privatization of public infrastructure through “public-private partnerships,” or “P3s,” is the rage in states these days. In Maryland, transportation officials now propose to use this method to build a new light rail line—called the Purple Line—through the suburbs of Washington, …