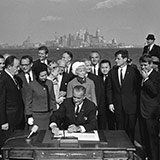 Thinking of the United States as a nation of immigrants may promote inclusivity in a time of rising xenophobia, but it also serves to exclude and obscure what the U.S. really is: a nation of migrants.

On May 2, as President Obama arrived in Mexico City, hundreds gathered outside the heavily fortified United States Embassy to protest his visit, U.S. immigration policies, and U.S. economic and political influence in the region.

News organizations must be held accountable for the impact their use of “illegal” has not only on individual readers, but also on communities and on any chance of future congressional action.

Adam Goodman: The Court Leaves Arizonans in the Lurch

Sometime in 2012, Valente Valenzuela and his younger brother Manuel will find out whether they will be deported from the United States. Valente, sixty-two, and Manuel, fifty-eight, were born in Mexico, but moved to the United States in 1955, and …