From the start of the current economic crisis, commentators have compared the ongoing unpleasantness to the crash of 1929, with the implication that we might soon begin to suffer a version of the Great Depression if we did not avoid the errors of our predecessors. Right-wing and libertarian pundits knew to a moral certainty what those mistakes were: neither Herbert Hoover nor Franklin Roosevelt had the wisdom to leave recovery to the energies of private enterprise. Few liberal or left commentators disputed the underlying point, conceding that though the New Deal brought the nation many fine reforms, it did not produce recovery from the slump—thus leaving the Right free to define the New Deal as a relic of America’s pre-Reagan dalliance with socialism, best forgotten. Yet the data support neither the Left’s concession nor the Right’s contention. As a result we have little ability to talk meaningfully about the New Deal and its possible lessons for today. We can learn from the Roosevelt administration’s successes and failures; we have just to know what they were.

Certainly the New Deal did not see an end to the Great Depression: GDP did not return to trend until the war. But the slump was clearly ending and would, in all likelihood, have ended even without the war. Consider the progress of real GDP during the 1930s. 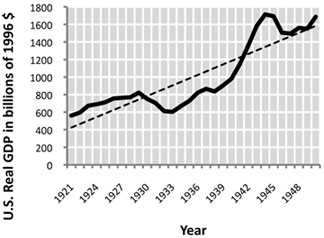 GDP sank throughout Hoover’s term in office and rose throughout Roosevelt’s first two terms, with the exception of the dip in 1937-1938. During Roosevelt’s presidency, and well before the war, the economy was recovering. Any assessment of the New Deal as a failure at promoting recovery assumes that this improvement could and should have happened faster. But this is not a terrifically reasonable supposition. As Christina Romer has pointed out, annual rates of economic growth during the New Deal (1937-1938, as always, excepted) averaged 8 percent to 10 percent; “these rates of growth are spectacular, even for an economy pulling out of a severe recession.” Something moving at a spectacular rate and in the right direction that nevertheless takes almost a decade to get where it’s going has a long way to go. In homelier terms, imagine you want to drive from New York to San Francisco. You might make good time—you might even, though of course one would not recommend it, exceed the speed limit as you barrel along Interstate 80. And you might feel after two days that you had been driving a long time—but you still wouldn’t be there, even though you’d been making good time and heading in the right direction: San Francisco is far away from New York.

In other words, it took a long time to recover from the slump of 1929-1932 because the magnitude of the catastrophe was so great. We cannot say simply from the data that the New Deal promoted recovery, but we can say that whatever drag ...