How All Politics Became Reproductive Politics: From Welfare Reform to Foreclosure to Trump
by Laura Briggs
University of California Press, 2018, 304 pp.

In the 1970s, feminists demanded that their government pay them wages for housework. Beginning with the International Feminist Collective in Italy in 1972, the Wages for Housework movement spread across the globe. Their demands for compensation issued from a larger political ambition: to abolish gender inequality by eliminating the distinction between work done in the home and work done in the marketplace. “Wages for housework for all women,” the New York Wages for Housework Committee argued, “means the power to refuse the double shift of a second job, which is now our only alternative to working for nothing.”

At the core of the Wages for Housework movement was the concept of reproductive labor. Simply put, reproductive labor is the work required to sustain human life and raise future generations. The concept comes from Marx, who distinguished the productive labor of the factory from the unpaid work that reproduces labor power. For capitalism to survive, workers must be nourished from one workday to the next, and future generations of workers must be born and raised. Cooking or preparing food, cleaning and maintaining the home, caring for the elderly or the sick, and raising and looking after children are all forms of labor that make possible the flow of generations. Historically, that work has been performed by women.

Reproductive labor is like electricity, invisible yet everywhere, and it powers everything. Much of the negotiation of daily life involves deciding either to give your time and energy to performing reproductive labor, or outsourcing it to someone else. It is unrecognized, uncelebrated, often unpaid, and yet utterly necessary. It is not currently a part of our everyday political lexicon, but look closely into any major political issue today, and you will likely find a struggle over reproductive labor. 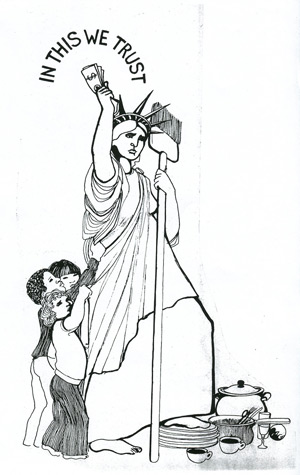 This is the provocation of Laura Briggs’s book, How All Politics Became Reproductive Politics. It is a history of neoliberalism, told from the vantage point of the family. The chronology is a familiar one: in the late 1970s the U.S. government moved to address inflation by tightening the money supply, dismantling the social safety net, and weakening the bargaining power of unions. Confronted with the double blow of stagnating real wages and fewer sources of public support for reproductive labor, most households could not sustain themselves on a single income. Meanwhile, conservatives justified the shrinking of public programs by denigrating black families and fulminating against “welfare queens.” (In reality, white women and children were the biggest beneficiaries of welfare.) All of this has shifted responsibility for reproductive labor from the public sphere onto the shoulders of private individuals and families. The dual-income nuclear family has become the site of all dependency. Those who don’t fit into that family model are deemed immoral; those who do face ever increasing burdens of reproductive labor.

This turn in reproductive politics has led to what Briggs calls “offshoring reproduction.” Families under increased financial pressure must pay others to do reproductive labor. The work of social reproduction is pushed further and further down the social hierarchy—onto employed women taking up a “second shift” at home, and then onto nannies and house cleaners. Many of these domestic workers are immigrants made “available” as labor through the devastating effects of structural adjustment policies in their home countries, and middle-class American families can afford to hire them because their legal vulnerability keeps their wages low. The relationship stretches abroad, as those travelling workers must then bear the expense of leaving their children with other caregivers at home, often in Central America or the Philippines. By labeling this process “offshoring reproduction,” Briggs makes visible the relationship between the wealthy, white, career woman and those who care for her nanny’s children.

The conditions in which women become pregnant and give birth have also become more precarious. Briggs considers two kinds of infertility. The first is caused by economic demands—women in competitive, high-paying careers delay childbirth until they are professionally and financially secure, but less likely to become pregnant without assistance from expensive reproductive technologies with high failure rates, such as in vitro fertilization. The second kind of infertility is caused by structural racism—in the workplace, in the housing market and, crucially, in the medical establishment. Infertility is one outcome of a systemic assault on the reproductive lives of black women, the consequences of which are evident in the statistics: compared to white women, black women are more than twice as likely to have their infants die, more than three times as likely to die in childbirth, and twice as likely to struggle to become pregnant. Briggs does not claim that these two kinds of infertility are equivalent. As she points out, making IVF available to affluent white women while pathologizing and neglecting black pregnancy constitutes de facto eugenics. Her argument is that, in both cases, we should define infertility not as an individual medical problem, but as a condition with economic and social determinants. To address infertility, we must address sexism and racism.

It’s not a stretch to see child care, fertility, and maternal health as “reproductive politics,” but the capacious political potential of the argument comes when Briggs looks further afield. She argues that the court decision legalizing gay marriage was based not on freedom or equality, but on the principle that responsibility for children, the sick, and the elderly should fall to private families, rather than the state. Expanding the legal definition of marriage perpetuates this economic arrangement. Mass incarceration has separated millions of children from their parents, causing immeasurable psychological damage as well as removing countless hours of care and reproductive labor from households. A high proportion of those who had their homes foreclosed in the 2008 financial meltdown were single women, female heads of households, and women of color who had been targeted by predatory subprime loans. In all these cases, the state abdicates responsibility and individual families and communities must take on more work, more debt, and more risk.

“There is no outside to reproductive politics,” Briggs argues. Perusing mainstream news media outlets provides ample evidence in support of this claim. A recent move by the Department of Education to deregulate the student loan debt collection industry comes at a time when parents increasingly bear the cost of educating their children, and young adults are saddled with debt at an age when they might consider starting their own families. Trump’s overturning of federal flood-risk management standards for housing construction makes families, rather than the state, responsible for the health and financial risks associated with rising sea levels. Marco Rubio’s proposal that women access maternity leave by drawing down their social security benefits relieves none of the financial costs of bearing children, entrenching a social arrangement in which individual women, rather than the public, are responsible for social reproduction. These struggles might all be framed as a battle over who should do, and pay for, the reproductive labor of caring for people at all life stages and raising future generations.

One could go on and on through the headlines in this manner, and that is the point. By focusing on reproduction, Briggs shows that privatization and increasing wealth inequality are as much about gender as they are about class. What Briggs is offering is not a comprehensive account of reproductive politics, but rather a framework for reinterpreting all politics.

Perhaps we can define all politics as reproductive politics. But should we? A basic political platform along these lines might demand policies that offer material support for reproductive labor and reject policies that shift those burdens onto private individuals and families. One benefit of such a politics is that it is universal: everybody either performs reproductive labor or relies on someone else’s. Equally important, a politics defined in terms of reproductive labor justifies a radical redistribution of resources that accounts not only for wealth inequality, but also for the material effects of racism and sexism. As Briggs makes clear, those who historically have taken on the most unrecognized reproductive labor are the poor and especially women of color. To call for a politics in which reproductive labor is more equitably performed and remunerated is to call for material redistributions along lines of class, gender, and race. To expand what counts as work is to radically reconfigure whose work is valued, and to begin to dismantle the perceived stalemate between class politics and identity politics.

What about the rest of the world? Briggs keeps her analysis within U.S. borders, yet the United States is implicated in the reproductive lives of individuals and families far beyond its borders. The Mexico City Policy, or the global gag rule, is reinstated every time the American public votes a Republican president into office, curtailing the provision of lifesaving maternal and child-health services to women around the world. And the U.S. government is not the only American entity that gets an outsized say in global reproductive politics. Private American citizens and philanthropists increasingly have the power to direct health and educational resources around the world and set public agendas without being accountable to an electorate. Melinda Gates may help to save lives by making contraceptives available to women in developing nations, but her argument that birth control will lift individual women around the world out of poverty ignores the ways American environmental and trade policies, not to mention war-making, shape the reproductive lives and wellbeing of women across the global South.

Briggs knows all of this. She has examined reproductive politics on a global scale in her earlier work. Her decision to restrict her focus to the United States in this book reflects a choice to address these issues in the realm of electoral politics, with American citizens making demands of a government that is accountable to them. But if, as Briggs argues, racism is what motivated electoral support for neoliberal policies in the 1980s, what makes a progressive, inclusive, redistributive reproductive politics politically possible now?

In a way, Briggs suggests an answer with the structure of her book. Each chapter brings together constituencies differentiated along lines of class, race, immigration status, and sexual orientation by illuminating how they are connected by a more universal reproductive politics. Will the more privileged members of these groups see it that way? I am reminded of a brilliant sign from the 2017 Women’s March that posed the challenge: “See all you nice white ladies at the next BLM march, right?” In a moment of optimism, the sign pithily conjured a history of exclusions within American feminist movements. As feminists of color have long observed, feminisms that have claimed to be universal have often presumed their subjects to be white, straight, healthy, safe, middle-class, politically enfranchised, and able-bodied. The Women’s March was about a number of issues, reproductive freedom among them, and nothing could be more of an assault on reproduction than the threat of state-sanctioned violence against the children that black mothers bear and raise. Can we turn these connections into coalitions? No single book can answer that question. But Briggs has shown that we must ask it.

Emily Callaci is an assistant professor of history at the University of Wisconsin, Madison. She is currently working on a book about the history of contraception and family planning in Africa.